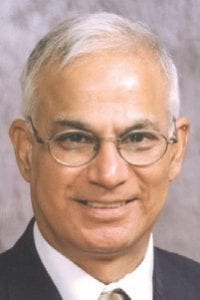 FLINT — Devinder Bhrany, MD, has been elected to the position of Chief of Staff at McLaren Flint. He succeeds Jagdish Bhagat, MD, who served a total of 16 years as Chief of Staff.

Bhrany, a board certified neurologist, joined the McLaren medical staff in February 1975. During his tenure at McLaren, he has served in several positions of leadership for the Medical Center including elections to Chair the Department of Internal Medicine and Chief of the Division of Neurology.

As a Department Chair, Dr. Bhrany was a member of McLaren’s Medical Executive Committee from 1994 to 2001. He also accepted appointments by the Chief of Staff to serve on the Performance Improvement Council (1995-2001) and the Bioethics Committee (2009-2013).

Bhrany received his medical degree from Government Medical College of India with an internship through Mercy Hospital of Buffalo in New York and residency training through Saint Louis University Affiliated Hospitals in Missouri. — G.G.