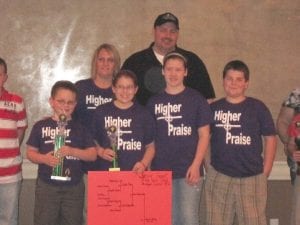 SWARTZ CREEK — The Bible quiz team of Higher Praise Church in Swartz Creek is headed to Dallas for a national Bible quiz tournament on June 19-22.

The quiz team, consisting of 8-12 years olds, won the Junior Bible Quiz Team state championship in Lansing on May 4-5, earning them the chance to compete in Dallas for a national championship. The team boasted the win in Lansing over more than 10 other youth quiz teams from churches around Michigan.

The Swartz Creek team is made up of Kia Kimball-Bennett, Brianna Gary, Tyler Hopkins and Abram Shafer.

The state championship tournament featured a 20 question format, covering the New Testament. At the end of the tournament, three members of the Swartz Creek team were named to the Michigan District All-Star Team and received trophies.

“I couldn’t be more proud of them,” Shafer said.

The national tournament will be a double elimination format and host teams from over 10 states.

“It will be intense. You’re on the edge of your seat the whole time,” Shafer said. “It’s real competitive.”

Locally, the team competes against other Flint area churches in a league every second Saturday of the month from January to April. Bible quiz team coach Teresa Dennis practices with the team every Sunday for one hour, preparing the kids for competition.

“The kids studied extremely hard and continue to study to become number one in the nation,” Dennis said.

The higher praise Church will be hosting upcoming garage sales in Burton, Swartz Creek and Lennon to raise money in order to send the quiz team to Dallas. Church members are donating items for the sale, and the goal is to raise more than $1,500 of the approximate $4,000 cost to send the team to the national championship tournament.

They have already raised about $2,000 through church offerings and other fundraisers, including a bake sale and pie auction.