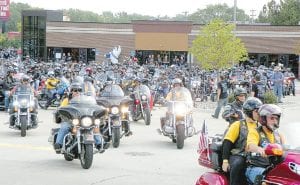 Riders embark on a police escorted run from Vehicle City Harley-Davidson on Miller Road inFlint Township to downtown Flint for the annual Bikes on the Bricks event.

FLINT TWP. — An estimated 1,000 bikers joined police on the 40-mile Bikes on the Bricks fifth annual ride on Saturday.

As early as 3 p.m., the parking lot at Vehicle City Harley-Davidson, the ride sponsor, was clogged with bikes raring to go.

The threat of rain from cloudy skies never materialized and the ride took off promptly at 4 p.m. led by local law enforcement vehicles.

Officers from Birmingham, Dearborn Heights, Inkster, Grand Rapids and Rocky River were among those mounted up.

Proceeds from the ride will benefit three charities, said Jeff Wade, BOB promotions chairman. Half of the money raised will go to support the Police Motor Unit. Onefourth will go to the Police Athletic League which sponsors children’s activities and the remaining fourth will be donated to the Olds Newsboys organization which provides Christmas gifts for needy children.

About 750 people registered for the ride, said Aileen England, a BOB worker. Organizers do not yet have a final tally on how much money was raised. Each rider paid $10 with passengers paying $5 each.

Last year’s ride raised $8,000, according to information reported on the BOB web site.

Just before the ride started, Flint Police Officer Eric Rodgers cautioned riders to wear helmets, ride in pairs and be safe. His last words to the teeming mob were “Mount up.”