Big MO is going to Worlds! 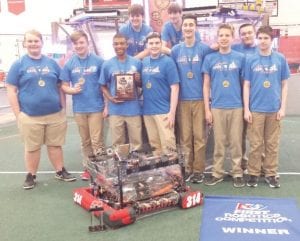 Last weekend, the team competed against 159 other teams from around the state at the meet hosted by Saginaw Valley State University

The 160 teams were divided into 4 divisions. Big Mo was part of the Ford Division, ranking first out of 40 teams in that division.

“We were in the No. 1 spot for most of the weekend and all day on Friday,’’ said Ellen Crain, team coach.

As the1st Alliance Captain, Team 314 selected two other teams to partner with them in elimination rounds. They chose Team 27 RUSH (Clarkston) and Team 5907 CC Shambots (Novi).

The alliance held up until the quarter finals when it was taken out by the 8th alliance.

In the awards ceremony, Big Mo received the Innovation in Controls Award sponsored by Rockwell Automation. This award celebrates a team with an innovative control system or application of control components to provide unique machine functions.

According to the judges: “Engineers on this team kept their cool and didn’t get agitated when they had to go back and rework their original design. To fix the problem, the team added new features to the control system and created a very competitive robot. At the same time, these engineers expanded the hopper and their knowledge.”

It was their last competition this year in Michigan.

Their point total qualified Big Mo to compete at the FIRST World Festival in St. Louis MO which begins on Wednesday, April 26 and continues to Saturday, April 29.

The team will leave on Tuesday, April 25 and return home on Sunday, April 30.