Big MO recognized by the Carman- Ainsworth Board of Education 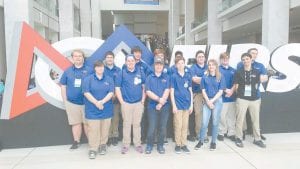 FLINT TWP. — On Tuesday, June 19, the Carman-Ainsworth School Board recognized the high school robotics team 314, Megatron Oracles aka “Big MO” for their outstanding season this school year. The team competed this season in three district competitions in Flint, Livonia, and Forest Hills and earned enough points to move onto the State Championship in Saginaw and then earned a spot at the FIRST World Championship in Detroit in April.

The highlights of this season included:

If you would like to get involved or donate to this award winning team, contact head Ellen M. Crain at 810-691-2810 or email at ellenc@bigmo314.com