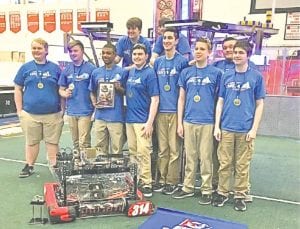 Carman-Ainsworth HS robotics team won a tournament last week and qualified to compete this week in the state championship in Saginaw.

“Going into this (Livonia) event we were ranked 258 in the state,” said Ellen Crain, team coach. “This was their second competition this year.”

Now Big Mo (Team 314) is ranked 57th out of 451 teams in the State of Michigan with a total of 91 points earned towards the Michigan FRC State Championship, Crain said.

Their goal now is to qualify for the FRC World Championship, April 26-29 in St. Louis, Missouri.

Originally ranked 20 out of 41 teams after the qualifying round in the Livonia competition, Big MO was selected by the 4th Alliance captain, Team 3414 Hackbots of Farmington. Together, they selected Team 3175 Knight Vision of Grosse Pointe Woods.

During FRC tournaments, the top eight teams from the qualifying rounds are designated captains and they in turn select two other teams to form an alliance. These alliances then compete in best two of three rounds to determine the overall winner.

Big MO generated 56 points during tournament, which combined with the 35 points from their first district tournament, gave them a total of 91 points and their ticket to the big dance.

This winning team is not to be confused with the C-A middle-school robotics teams that have already nailed down their spot in the VEX world championship competition after winning the state championship last month. VEX and FRC are different robotics programs.

For information on competing teams, including several from the Flint area; and to find out how to video stream the tournament go to www.thebluealliance.com/ event/2017micmp