Bikes on the Bricks will grow to three-days in 2011 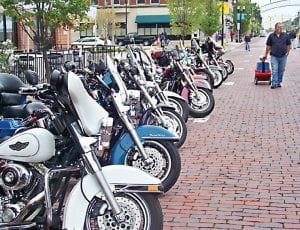 Attendees view bikes that were part of the 2009 Bikes on the Bricks on Saginaw Street in downtown Flint. Next year’s event will see an additional day added on to the festivities.

FLINT
— If you enjoy the annual Bikes on the Bricks event, there will be more of it to love come next year.

The Bikes on the Bricks Committee of the Flint Area Convention & Visitors Bureau held a news conference to announce the addition of another day to the motorcycle festival held in downtown Flint. In 2011 the event will be a full weekend, Sept. 23-25.

Tanya Lane, events coordinator for the FACVB, said the growth of Bikes on the Bricks is comparable to the success of Flint and Genesee County’s largest summertime event — Back to the Brick — which has transitioned from a day-long car show when it began in 2005 to a 5-day festival ranked among the top 20 in the United States.

“We’ve experienced tremendous growth in both events,” said Lane. “The community has been very supportive of them and, for that reason, we expect continued expansion and new pathways to partnerships in the future.”

“We have been fortunate to be a part of such a great event for this community and we are honored to receive such a generous gift,” said Sgt. Rick Besson, who represents Friends of the Flint Police. “As the event continues to grow, we hope that its impact on the local economy and on local service organizations will be even broader.” — G.G.