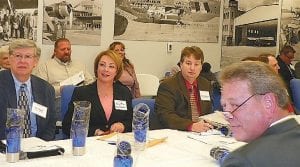 Flint Township Supervisor Karyn Miller was among reps from participating municipalities in four counties who met last week to sign an interlocal agreement to create an aerotropolis board.

FLINT TWP. — After a year of planning, more than 50 public meetings and the collaboration of 33 units of government in four counties, the aerotropolis at Flint Bishop Airport prepared for take-off at a joint meeting held at the airport last week.

Representatives from Genesee, Lapeer, Shiawassee and St. Clair counties, met to sign an Interlocal agreement creating a regional development authority that will oversee efforts to attract more businesses and jobs along the I-69 trade corridor.

The Next Michigan Development Corporation, or aerotropolis designation, was due to be submitted for final review and approval Wednesday in Lansing during a meeting of Michigan Economic Development Corporation’s Michigan Strategic Fund, according to James D. Smiertka, senior vice president of Prima Civitas Foundation, who helped develop Bishop’s aerotropolis application. It has received a recommendation from an MEDC subcommittee and has already been signed by Gov. Rick Snyder, he said.

The designation places Bishop Airport as the hub of economic development incentives and marketing to draw businesses and create jobs.

At the meeting last week, the newlyformed MNDC took its first steps to elect officers and establish bylaws and other procedures including setting meeting dates for 5 p.m. on the third Thursday of each month to be moved around the region among participating municipalities.

Jim Rice, director of Bishop Airport, recalled how far Bishop Airport has come in 20 years. He pointed out a photo hung on the wall of the conference room showing the original airport that was a small brick building surrounded mostly by fields. The airport now encompasses land in Flint and Flint Township and still is growing.

“When communities work together, it can only bring positive results for everyone and that’s what’s happening here … communities are pulling their resources together to move our region forward,’’ Rice said.

Participating counties anticipate economic benefits from a multi-modal industry developed along the I-69 corridor.

Participating communities in Genesee County include the cities of Flint, Burton, Fenton and Grand Blanc and the townships of Davison, Flint, Grand Blanc, Mundy and Mt. Morris. The Genesee County Board of Commissioners has also signed on.

Others represented at the meeting included the cities of Lapeer, Port Huron, Owosso and Durand as well as many townships and villages in the four counties.

Bishop will become the third of only five MNDC designations to be allocated in the state. The first two MNDC were awarded to airports in Detroit and Lansing.