Bishop Airport travel up in 2014 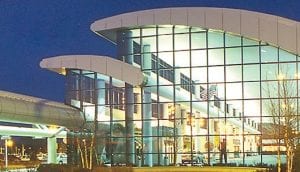 FLINT TWP. — Passenger boardings increased 5.75 percent in 2014 at Bishop International Airport, according to a press release.

“The final numbers for 2014 are in and we couldn’t be more pleased with the way our community continues to support Bishop International Airport and our airlines,’’ said Craig Williams, airport director. “Our final statistics have us coming in at a total passenger figure of 839,781, with our total enplanements up 5.75 percent over 2013 This increase, combined with an increase in airline load factor, shows strong demand for air service in this region.”

Three of Flint’s four scheduled service airlines showed gains for the year. Southwest Airlines brought the largest passenger increases to the airport, with a 22.79 percent rise in ridership year-overyear.

United Airlines was up 12.25 percent and American Airlines saw an uptick in percentages of 2.74 percent for the year. Additionally, a small number of charters also departed from the facility in 2014 — an increase of 42.28 percent over comparable 2013 statistics.

Flint offers the lowest average airfares in the state. It is also the most centrally located low-fare portal in Michigan. Southwest Airlines offers year-round, non-stop jet service to Las Vegas, Baltimore/Washington, Tampa Bay and Orlando plus seasonal service to Ft. Myers/Naples. United and American provide jet service to Chicago O’Hare and Delta Airlines has jet services to Atlanta and Minneapolis.

For more information about the airport, visit its website at www.bishopairport.org.