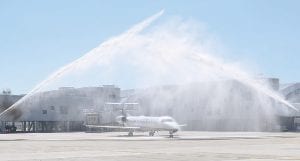 “The addition of these jets marks the first time in the history of our airport that we will be an all-jet operation,’’ said Pat Corfman, airport director of marketing and public relations, in a press release. “It is a double celebration.”

Airport Director Jim Rice said that United has been a great partner to the airport and community.

“We couldn’t be happier with their decision to start serving our passengers nonstop to Chicago O’Hare,” he said.

“United is pleased to offer the first-ever service between Flint and our Chicago hub,’’ said Cheryl Cannon, sales manager for Michigan. “The flights will not only offer convenient travel options between the Chicago area and central Michigan but will provide one-stop connections to 164 other destinations in United’s global route network.”

United is O’Hare’s largest airline, according to the press release. United and United Express operate more than 580 daily flights out of O’Hare and more than 50 daily nonstop flights to nearly 40 international destinations in Europe, Asia, Latin America, the Caribbean and Canada.

A ribbon cutting at 10:20 a.m. preceded the first 10:53 a.m. flight to Chicago. A towering canopy of water shot off by fire trucks created a water cannon salute to the departing plane.

United Express flights to Chicago O’Hare are scheduled to leave Bishop at 6:05 a.m., 10:53 a.m. and 3:48 p.m. arriving in Chicago at approximately the same time due to the one-hour time difference.