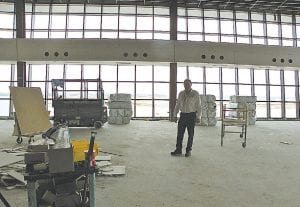 When completed in October, this terminal will add four more jet bridges for passengers flying in and out of Bishop International Airport, as described by Pat Corfman, marketing director, in a talk last week to the West Flint Business Association.

As guest speaker last week at the monthly meeting of the West Flint Business Association, Corfman discussed past, present and future air services at the airport on track to make the sky the limit.

“I always used to tell people, you are never going to see Southwest in this airport, so get used to it. It’s never going to happen. We’ve got AirTran and they’re fabulous,” she said.

Now Corfman is tickled that Bishop landed Southwest Airlines by chance when it purchased AirTran Holdings last May. That was not a done deal until last month when Southwest officially announced plans to continue service out of Bishop.

“If we had lost them, we would have been down 40 percent in traffic,’’ said Corfman, who plays an active role in recruiting airlines, Bishop is on track to reach one million passengers this year after Southwest completes its integration of AirTran. 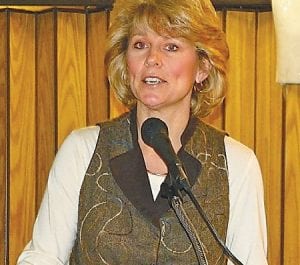 Pat Corfman, director of marketing at Bishop International Airport, talks to the West Flint Business Association about many improvements in airline service coming in the next year.

During the transition, Bishop officials are expecting a 10 to 15 percent dip in flights which could make 2012 the toughest one yet, Corfman said. But then comes the payoff.

“By this time next year, when all is said and done, we could be double in size,’’ she said.

Since forming an Airport Authority in 1987, Bishop has grown from a busstation sized airport to a regional player with a spacious terminal that opened in 1993, ample parking and millions in improvements, she said. Bishop was the third largest airport in the state when Corfman came aboard in 1999 and is now the third largest behind Grand Rapids and Detroit, she said.

“After that crash, they were more willing to talk to airports that were smaller and farther away from what they wanted,’’ Corfman said. “Detroit Metro rejected them but we accepted them.”

Back then, nobody saw AirTran as serious competition, but with vital community support, it thrived at Bishop. Northwest and Delta both took notice and started flying AirTran routes to try to grab some of that business but many local travelers stayed loyal to AirTran, Corfman said.

Construction now underway will add four new jet bridges for yet-to-be-identified air carriers. Two of the bridges, costing about $600,000 each., are expected to open in October. With them and a wider concourse will come room for lanes to expedite security clearance, she said.

A recent Catchment Study forecasts that Bishop has the potential to double or triple its size, Corfman said.

Getting to this point has been a turbulent ride for Bishop. Every airliner serving Bishop has gone through a bankruptcy or merger, she said. Add to that the fallout from the 911 disaster, the oil crisis and the economic downturn in 2008. Bishop had to rebuild air service after each of those setbacks, she said.

She stressed that the Southwest arrangement is subject to constant market reevaluation. In other words, now that they’ve landed Southwest they have to work to keep them.

Southwest likes to keep eight or nine routes a day out of a city to make it viable, Corfman said. Those destinations still are being decided but Bishop’s wishlist includes multiple cities in Florida and Las Vegas, Corfman said.