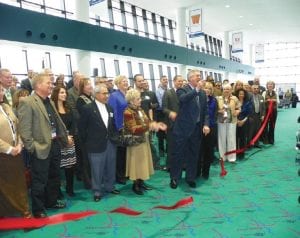 Win Cooper, chairman of the Bishop Airport Authority, cuts the ribbon on the new airport expansion surrounded by supporters.

GENESEE COUNTY — When Winfield Cooper, chairman of the Bishop International Airport Authority cut the ribbon Tuesday on the airport’s new $18 million passenger terminal extension, it marked the end of a long flight from being a bus-station sized facility to a major regional transportation hub.

Standing before a model for airport expansion developed 22 years ago, airport director Jim Rice said the completed terminal realized the last phase of an unchanged vision.

“This will be our fifth expansion in 20 years,” Rice said. “I am very proud to say that the Airport Authority has stuck with this vision and created what we have here today.”

He cited Reynolds, Smith & Hills of Florida, which developed the model, and has been the airport’s architect and engineering firm for all 20 years and Sorensen Gross Construction of Flint Township which was the building contractor for four of the five expansions including this last one..

He also thanked many supporters, including U.S. Congressman Dale Kildee, and other politicians who over the years helped secure more than $100 million toward airport development, and more than 90 individuals who have served on the airport authority and kept the vision on track.

Before the official ribbon cutting, Rice and Cooper were joined by several speakers who hailed the airport’s growth and the vision and leadership required to get there.

Tim Herman, CEO of the Genesee County Regional Chamber of Commerce, recalled when as director of finance for the City of Flint back in 1988 he handed the reins of the airport over to Rice and the Airport Authority and wished him luck for what had been a drain on the city’s resources.

Bishop Airport has always been an important asset in Genesee County and is now positioned as a major component in economic development, said Herman.

“Many of you have hard me talk abut the important roles that airports play in regional economic development,” he said. “One of the first things that a company looks at when considering a new location is reliable air service and access to that service.”

Bishop’s expansion is timely because it is the centerpiece of the I-69 Trade Corridor and Michigan Next Development Corporation’s regional economic development efforts.

J. David VanderVeen, chairman of the Michigan Aeronautics Commission and director of the Oakland County Central Services Director for the county’s three airports, cited a comarketing relationship with Bishop that goes back at least a decade.

“We’ve got 1.2 million people and 53,000 businesses,” VanderVeen said of Oakland’s contribution to Bishops growth. The expansions represent Bishops willingness to do what was needed to “put this facility on the map,” he said, recalling starting out with about 200,000 passengers per year.

“Really it has been a great marriage culminating today in a new acre of building here,” he said, also mentioning the four new gates and two new boarding bridges in the new terminal.

Rice added: When you go to talk to an airline bottom line you got to show them how you can make money. When you take the economics of Oakland County and Genesee County combined … it is a pretty good picture.”

Bishop’s expansion has infused millions of dollars in the Flint and Genesee County economy, created hundreds of jobs and will allow the airport to double its passenger capacity to an anticipated two million or more a year, said David Solis, of the city of Flint, standing in for Flint Mayor Dayne Walling,

Flint Township Supervisor Karyn Miller was also in attendance. She cited the promise of the four-county Aerotropolis and Next Michigan Development Corporation to promote business growth along the I-69 Trade corridor.

“I hope this puts us on the path to continue growing,” Miller said of the township’s involvement in the regional economic development effort.

In closing remarks, Rice said the next challenge is to spread the word about what Bishop has to offer.

“We build it and they will come doesn’t always work,” he said. “We need you to help us spread the word.”