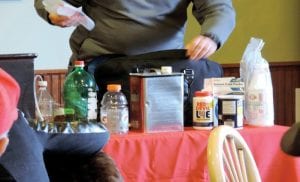 FANG officer Jerry Fowler spoke to the West Flint Business Association about how easy it is to assemble ingredients to make meth.

FLINT TWP. — Like a mad scientist setting up an experiment, he laid out the lethal supplies of the trade – lye, battery acid, propane fuel, bathroom cleanser and several other items that seemingly no sane persons would want to inject into their body.

Lt. Jerry Fowler, an officer with the Flint Area Narcotics Group (FANG) was demonstrating how relatively easy it is to assemble the ingredients to manufacture methamphetamine – a highly addictive recreational drug.

In his educational presentation to the West Flint Business Association, Fowler’s show-and-tell covered meth making and a look at other commonly used drugs including marijuana, crack and heroin.

Fowler, a member of the FANG meth team, said they’ve probably responded to about 15 meth calls in Flint Township in the past month or so.

“It’s not the big labs like those seen on “Breaking Bad” (TV series),” he said. “These guys are not as good as that.” Using a two-liter pop bottle and ingredients that can be bought at a hardware store, they can brew about two grams of meth in 45 minutes while driving around in a vehicle, he said. That sells for about $80 to $100, he said.

Problems arise when the cookers aren’t keeping an eye on the brew and it explodes. FANG officers wear Hazmat suit when called in to clean up meth operations, Fowler said. He answered questions about how officers track meth users and cookers.

Despite its euphoric high, meth is highly addictive and toxic.

“Eighty percent of users, the first time they use it, they are hooked,” Fowler said. Within six months to a year, meth users lose half their body weight, have sunken cheeks and develop a nasty itch that causes some of them to scratch their skin off down to the bone, he said.

Fowler also talked about local marijuana use and abuse. The legal and illegal status of the drug leaves law enforcement sort of stuck in the middle, he said.

The state law for legally growing marijuana for medicinal purposes allows a grower to have up to five patients including himself and 12 plants per patient, he said. But many are growing way more than that and selling the overages to illegal dispensaries. For example, one Grand Blanc-area bust allegedly turned up about 330 plants in a pole barn.

“The guys who want to make money are finding ways to do it,’’ Fowler said. “It is not what (the law) was intended to do. For the majority of the part we (FANG officers) see, it is a big money game right now.”

Marinol, a man-made cannabis pill, is available by prescription to control pain without the high, he said. So people who use marijuana for medicinal purposes don’t have to smoke it.

Heroin use is a big thing right now in Genesee County because it is so cheap, Fowler said. He attended a conference in Lansing on heroin use a few months ago and learned that most heroin users started out on prescription medicine. When they could no longer get prescriptions filled they turned to heroin, he said.

He also said prescription abuse is a big issue nationwide.

“We are beating about five other countries put together on how much prescription (medication) we send out,’’ he said. “We are like a pill-popping country.”

Fowler also talked about how FANG works with the Michigan State Police and the Genesee County Prosecutor’s Officer to identify and convict substance abusers. Getting busted with the components to make meth is a 20-year felony, he said.

FANG is supported by funds from local jurisdictions that pay dues. Flint Township pays $40,000 a year in FANG dues.

“It is a good deal for us to be involved with them,’’ Miller said. “Our police officer can hand over drug cases to them.”

Flint Township has one officer assigned to FANG and Police Chief George Sippert is actively involved in an advisory chief’s group.