Black bear hit and killed on I-75 in Flint Township 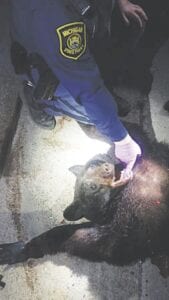 A full-grown black bear was struck and killed on I-75 early Monday morning. Photo courtesy of the Michigan State Police, Flint Post

FLINT TWP. — Police and wildlife officials are investigating an accident that left a black bear dead in the roadway on I-75 in Flint Township.

At 1 a.m. on Monday night, Michigan State Police troopers with the Flint Post were dispatched to investigate a report that a large animal had been hit on I-75 near Beecher Road. Police discovered that the animal was in fact a full-grown black bear that had been spotted by Flint Township residents in the Graham Road/Gilbert Road area late Sunday night.

Police said that the vehicle involved in the accident had left the scene prior to troopers arriving. MSP contacted the Michigan Department of Natural Resources (DNR) and turned the bear carcass over to the DNR’s Law Enforcement Division for further investigation.

Holly Vaughn, a DNR spokesperson with the Wildlife Division, said that black bear sightings are very rare in the Flint area and southern Lower Michigan as a whole.

“If you drew a line across the state under Clare County and the adjacent counties, the normal range for black bears in Michigan is from roughly that line northward and into the Upper Peninsula,” she said. “We do sometimes hear of individuals occurring south of this line, however.

“In the springtime, we often see young male bears wandering out of their normal range to try to find food and suitable breeding habitat,” Vaughn added. “They don’t usually stay in southern areas very long and end up turning around and heading back north.”

Vaughn said that the DNR has confirmed reports of black bears in Kent and Shiawassee counties in recent years. According to the Flint Township Police Department, the last black bear sighting in Flint Township came in 2006.

As stated by the DNR’s website, average adult black bears stand less than three feet tall at the shoulder when on all fours and are approximately three to five feet in length. Males are typically larger than females. Adult female black bears weigh approximately 90 to 300 pounds, and adult males weigh about 130 to 500 pounds.

Black bears are the only species of bear found in Michigan, with populations mostly contained to the Upper Peninsula and northern Lower Michigan.