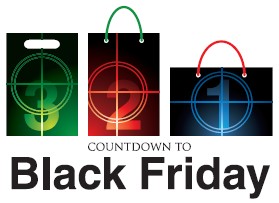 FLINT TWP. — Starting times for the madhouse shopping day after Thanksgiving known as Black Friday have been creeping forward each year until it no longer starts on Friday or even at midnight.

K-Mart and Big Lots stores will among be the first out of the gate this yearwitha6a.m.and7a.m.opening, respectively, on Thanksgiving Day. Big Lots plans to remain open until midnight and reopen Friday morning at 6 p.m. Kmart will stay open for 42 hours.

Most anchor stores and others at Genesee Valley Center shopping mall will be open by early evening on Thanksgiving Day and many big box retailers throughout the township retail corridor have also announced Thanksgiving opening hours.

That means the township police department will be busy too, said Police Chief George Sippert.

“The shopping season used to start early Friday morning,’’ he said. “Now it is starting on Thursday afternoon and lots of businesses have asked for additional patrols. So it is pretty much all hands on deck from early afternoon Thanksgiving Day all through the weekend. It is a busy time for us but is also good for the township.”

Mall anchor stores, which all have separate outside entrances, are setting their own hours, as follows:

Michael’s craft store will open at 4 p.m. on Thanksgiving Day and remain open until 2 a.m.

Meijer stores are always open 24 hours every day except Christmas but plan to roll out Black Friday deals on Thursday and Friday, starting at 6 p.m.

Many other retailers are offering online Black Friday deals all weekend.

Shoppers at Genesee Valley Center during Black Friday hours can visit the Snapshot Site in the JC Penney Court and take a selfie to post on Instagram for a change to win a $500 gift card.

CARS 108’s Pat & AJ in the Morning will be broadcasting live from Center Court from 6-8 p.m. Friday morning. While supplies last, they wlll be handing out a Golden Ticket inside their Sweet Treat candy bars. One of 108 lucky winners will win a $1,000 prepaid gift card and the rest will get a $10 retailer gift card.

Power Shopper Bags will also be given out at Center Court form 8-9 a.m. on Black Friday, while supplies last. These reusable totes will contain a retailer gift card valued at $5 to $50, a Rockstar Energy Drink and other Genesee Valley Center goodies. The offer is limited to one bag per person, age 18 and up.