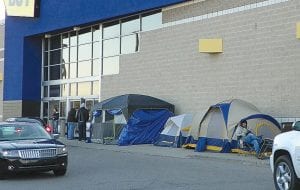 FLINT TWP. — Several tents pitched outside the Best Buy store most of last week were occupied by Black Friday shoppers who wanted to be first in line for the deals.

Alana Czechowski and daughter Alicia, 20, of Grand Blanc Township pitched the first one on Monday — a full four days ahead of the midnight Friday sale. By 5 p.m. on the day before Thanksgiving, they had been joined by four more tent dwellers.

Mike Gobie, also of Grand Blanc Township, was third in line after pitching at about 6 p.m. on Tuesday. He said his family postponed their big Thanksgiving dinner until Friday so he could do it. He was hoping to buy one of the 42-inch flat- screen TVs for $199, a $299 laptop and $40 Blueray disc player.

Alana Czechowski said she has five teen children to buy for. They took turns joining her in the 10 by 14 tent which was equipped with an air mattress, propane heater, folding chairs and tables and other convenience furnishings.

Alicia Czechowski said she was amazed by how many people visited them in the tent including most local media. They were first in line last year also, she said.

To those who say Thanksgiving Day should be a family time at home centered around the traditional big meal, Alana Czechowski said she is spending quality time with her children in the tent. She expected her husband to deliver his specialty spaghetti dinner for their Thanksgiving meal.

Some local businesses apparently enter the spirit of the activity. Alicia said that McDonald’s and Hooters were bringing them hot coffee and Little Caesar’s delivered to the tent as evidenced by a stack of pizza boxes on a table.

Alana Czechowski said other than a swing by the mall they weren’t planning night of shopping after getting what they wanted at Best Buy.

“We go home soon after we leave here and sleep the rest of the day,’’ she said. “We don’t get a lot of sleep out here on the last night.”

Technically, the Czechowski place in line was usurped by the winner of a radio station promotion giving away the first place in line in an open drawing.

The Czechowskis said they were fine with that.

Black Friday racked up a record weekend of sales – $52.4 billion, according to the National Retail Federation (NRF).

According to its survey, a record 226 million Black Friday shoppers visited stores and websites over the weekend, up from 212 million last year.

Similarly, Thanksgiving Day shoppers – both online and at stores – also rose to 28.7 million people up from 22.2 million in 2010.