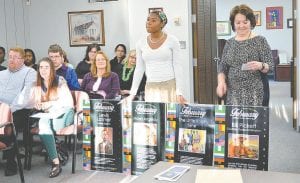 Randi Richardson, then a junior at C-AHS, was lauded by the board of education for posters she created for Black History Month, which are now the inspiration for an annual essay contest.

FLINT TWP. — A Black History Month research and writing contest, inspired by posters created by a former Carman-Ainsworth student, is back for its second year.

The contest, which offers cash prizes, was started last year by Recco Richardson, a former C-A school board member and the father of Randi Richardson, who graduated in 2016 and now attends Brown University.

As a junior, Randi created 52 colorful educational posters about prominent figures in Black History because she wanted to bring to the high school level an observance of February as Black History Month similar to what she had experienced in elementary and middle school. Randi spent a Friday night after school hanging the full-color posters throughout the high school where they were displayed during the entire month of February. She said then that she hoped that the posters could be displayed again.

And so they were – first last year and again this year. With her father spearheading the effort, the posters are being displayed on a rotating schedule that began Jan. 26 at Atlantis Alternative High School. They were scheduled to be taken down on Jan. 31 and moved to Dye Elementary School where they will be displayed until Feb. 5. Next, they will go to Rankin Elementary school from Feb. 7 to Feb. 16, to Randels Elementary from Feb. 16-21 and to C-A middle school from Feb. 21-23. The dates for display at the high school have not be finalized.

The second part of the observance is the research and writing contest open to all grade levels at C-A schools. The research papers must feature a subject related to an African American who helped shape and mold U.S. history. Randi’s posters can be used as a source to identify a subject.

The essays must be 300 words or less for first through fifth-grade students and 750 words for students in grades 6-12. More detailed information about format and content are being distributed on flyers at the schools.

Questions can be emailed to reccorichardsonphd@gmail.com or by calling 810- 394-7815.

Entries can be mailed to Recco S. Richardson Consulting, Inc., 2500 S. Linden Road, #321252, Flint, MI 48532. Entries submitted to teachers, school officials or others will be disqualified.