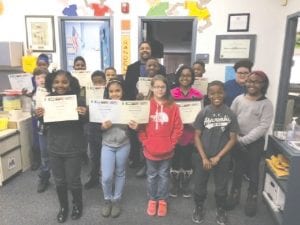 C-A students submitted 81 entries, with more than half of them (56) coming from the elementary schools, Richardson said.

The research writing contest asked students to find out more about African-Americans whose contributions helped shape and mold America and its history. It was inspired by 52 colorful posters featuring prominent African-Americans that were created by Richardson’s daughter Randi as a special project while she was a C-A student. Randi graduated last year and is now completing her freshman year at Brown University, where she is double majoring in Modern Culture & Media and Africana Studies.

Her posters were displayed on a rotation at all C-A school buildings during February to encourage students to learn about African-American history.

Subjects of the winning entries included Jane Bolin, he first African- American woman to graduate from Yale Law School; Ella Fitzgerald, a renown jazz singer who was the first African-American woman to win a Grammy Award in 1958; Katherine Johnson, a physicist and mathematician who worked for NASA and was the subject of the recent award-winning movie “Hidden Figures.” In her first-place essay about Oprah Winfrey, a fifth-grader at Randels elementary school wrote that Winfrey changed “the face of T.V. and entertainment.

She also contributed by showing women that despite the background you grew up in, you can still be important.” The student said Winfrey’s story inspires her when she is feeling defeated, Richardson, a local psychologist and former member of the C-A board of education, said he was impressed by the “level of energy students had towards the contest.” “It was refreshing to see, hear and read their personal understanding of the contribution that African Americana made to American history. … For each school building, the winning entries were exceptional. In fact, over the years I have read thousands of essays and scholarly research articles. I would say that the winning documents probably would place high in a statewide or regional writing contest.” Richardson credited the high number of entries by elementary students to teachers incorporating the contest in class curriculum. Because of the support from the C-A superintendent, building principals and teachers who rallied around the contest, Richardson said he plans to offer it again next year.