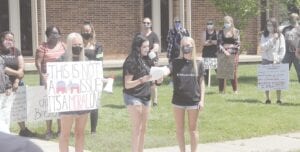 The crowd held a peaceful protest over the death in Minneapolis of George Floyd, an unarmed black man who was allegedly killed by a white police officer last week. The officer and three others there have been charged in the man’s death.

The incident in Minneapolis sparked protests and deadly, destructive riots throughout the nation for the past week.

But the event held in Davison was peaceful and was highlighted with speeches about racism, police brutality and inequality.

“We are plagued with systematic racism. Black Americans are criminalized as soon as they reach elementary school. They are targeted by police, evident by over-representation in the prison system, and incidents of police brutality,” said Haido. “America, which is supposed to be the land of the free, can’t even treat blacks, who helped build this country, with a fraction of the respect with which they treat white people.”

Raea Miller, a 2019 graduate of Davison High School, who is biracial, spoke about what it is like to be black.

She also addressed the crowd about what type of protest is needed to make change, admonishing those who simply put up a post on social media or black out their profile picture as a statement.

“We cannot protect pride or overlook situations like this anymore. I know everyone is hurt and outraged by the death of George Floyd and many others, as am I, however a black square or a shared hashtag is not going to end this,” said Miller. “Some of you post a Black Lives Matter hashtag for a weekend and think you’ve done your part. It is at your convenience and it is not a commitment.” 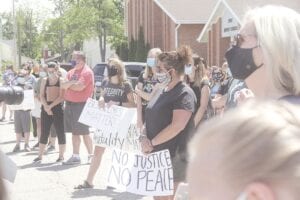 She urged people to educate themselves, protest and sign petitions whenever they can.

“People need to open up their eyes and realize this is a real issue and we really need to get to the bottom of it,” said Miller.

Mari Copeny, 12, who made a name for herself in 2016 when she declared herself Little Miss Flint and became a voice for the community in the Flint Water Crisis, also spoke at the event.

She asked the crowd what she is supposed to do when she has to worry daily about whether her father or little brother will come home safely.

“Today it not enough to not be racist, you have to be anti-racist,” she said. “This isn’t a race, it’s a marathon, and we’re just getting started.”

Kennedy, who grew up in Davison and now represents the community at State Representative in the 48th District, said she was not there to speak for the black voice in the community, but instead, she was there to amplify it. 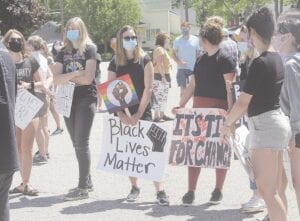 “In case you haven’t noticed, I’m an old white chick,” said Kennedy. “You might ask, what right do I have to speak at a Black Lives Matter event? I want to tell you my story, about a little girl who grew up in a place like Davison, which means I never even had to consider race as I grew up. But we all have a history with race.”

She spoke of growing up with only a couple of black children in the Davison school system and how she felt unprepared for dealing with diversity when she began her professional career as an educator. Kennedy spoke of growing and becoming more educated about race throughout her career and carrying that over to her role today as a lawmaker.

The rally was followed by a march down Fourth Street to M-15, south along the sidewalk there to Clark Street, then back east to Main Street and north into downtown Davison. 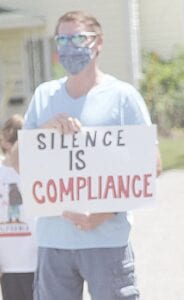 The police presence at the event was minor but was attended by the police chiefs of all three Davison area communities. 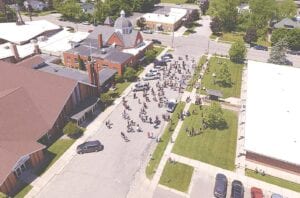