Black Lives Matter protestors take to the streets of Flushing 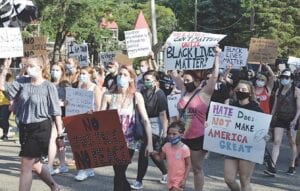 FLUSHING — Protestors with the Black Lives Matter movement held a peaceful march in the streets of Flushing on Tuesday evening.

The demonstration, which was organized by Flushing High School alum Malia Marve and several other recent FHS graduates, drew more than 300 people to Flushing to decry racial inequality and incidents of police brutality against Black Americans. Protestors gathered at Riverview Park to hear speeches from Black Lives Matter organizers and local leaders before marching down Main Street to Flushing City Hall and the Flushing City Police Department.

Upon reaching Flushing City Hall, protestors knelt in the street to honor George Floyd, an unarmed Black man who was allegedly killed by a white police officer in Minneapolis. The kneel-down and moment of silence lasted for eight minutes and forty-six seconds, representing the amount of time that Floyd was pinned to the ground when he died in police custody. 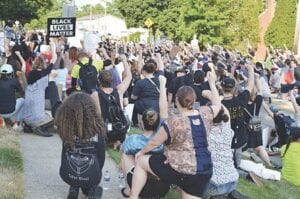 Prior to the march, several speakers called for a unified effort to end systemic racism toward Black Americans in Genesee County and the nation.

“We need to use our frustration for action and for change to bring about restorative justice,” said DeWaun Robinson, president of the Flint Black Lives Matter chapter. “Even though we’re protesting and marching right now today, tomorrow we should be at the table saying, ‘what we can do to bust down structured racism?’ How do we eliminate white supremacy? How do we go ahead and look at those discriminatory practices in housing, finances and healthcare?”

Trachelle Young, a candidate running for the Genesee County Prosecutor’s Office, said major changes also need to take place in the county’s criminal justice system, including the elimination of racial profiling practices and the over-incarceration and over-charging of Black residents.

Congressman Dan Kildee (MI-5) told protestors that no community or law enforcement agency is immune to the effects of racial injustice, saying the problem is widespread and institutionalized.

Kildee said residents need to follow through with the Black Lives Matter cause at the ballot box to bring about policy changes.

During the march, Flushing City Police and the Genesee County Sheriff’s Office blocked off access to several streets around downtown Flushing to keep commuters and protestors safe. No arrests were made during the protest, and protestors followed their intended route from Riverview Park to Flushing City Hall without incident.