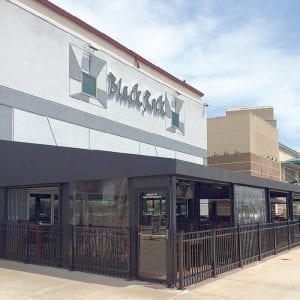 The exterior of the Black Rock Bar & Grill in Hartland.

DAVISON TWP. — The Black Rock Bar & Grill has announced it will be opening a new eatery on a 20-acre site at Lapeer and Irish roads sometime next year.

Lonny Morganroth, owner of Black Rock Bar & Grill, has purchased a 20-acre site at Lapeer and Irish roads. He plans to open the third in his new chain of restaurants, with locations already in Novi and Hartland.

Black Rock Bar & Grill first opened in Hartland in 2010 and features steaksgrilled on volcanic granite rocks which are heated to over 700 degrees.

“Black Rock is proud to announce that agreements have been signed with Creekwood Architecture out of Burton, MI and Desine Inc. out of Brighton, MI to build the upcoming Davison Black Rock, as well as Black Rocks across the U.S!” said Morganroth in a statement on the chain’s Facebook page. “Congratulations to both these great companies! We look forward to the new restaurant being built and being the prototype for all Black Rocks to come!”

Steaks of all cuts and sizes arrive on volcanic granite rocks. The rocks are heated to 755 degrees.

The restaurant allows guests to cook their seafood and steak to their liking or leave it to the chef, said Morganroth.

The Davison restaurant will feature outdoor seating, a full bar and a wine room.

Morganroth said he expects to hire more than 100 employees.

The restaurant features signature sirloin steak, complete with sides, as well as burgers, chicken, pizza and more. There is also a kid menu.

The Davison Township restaurant should be open by October 2016. Other locations are expected to open soon in Canton and Woodhaven. Two more are expect to open in Florida later this year.