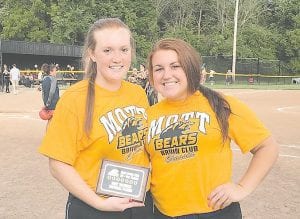 FLINT — Mott Community College hosted its annual Bruin Classic All Star softball game Wednesday at Mott’s softball field and the 10-inning showcase ended with a 6-5 win for the Black team.

Swartz Creek’s Rachel Mackey pitched three innings of scoreless ball to lead the Black team. Mackey, who will be toeing the slab for Mott CC beginning this fall, was named the Black squad’s MVP.

Forty-three high school seniors took part in the contest that saw the Black team take a 4-0 lead, fall behind by a 5-4 count, and then rally late for the 6-5 victory.

“This was a well-played game, especially on defense, where a lot of really good plays were made,” said Grand Blanc coach Jami Neubecker, who was one of three Black Team coaches. “It was a lot of fun and a close, exciting game.”