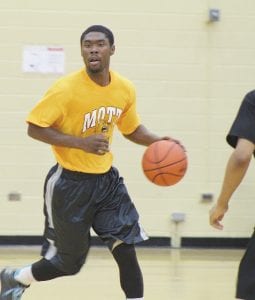 Local hoops’ stars battle it out in the Bruin Classic at Mott Community College last Thursday.

FLINT — The annual battle of the area’s top high school senior basketball stars is always a fun game to watch, but in the end, someone has to come out on top. The 21st Bruin Club All-Star Classic boys’ basketball game turned out to be quite entertaining, however, the Black squad rolled onto a doubledigit victory, 95-75, over the Gold team last Thursday.

Jaylen Randle, a member of the Black team, was the lone Cavalier representing the blue and silver in the all-star classic, however, Denzel Watts would have been included if he didn’t have to report to the University of Alabama- Birmingham, which he will be attending on a scholarship.

The Gold squad, which included the dynamic Lapeer West duo of Cullen Turczyn and Zeshawn Jones-Parker, was led by Swartz Creek’s JD Tisdale, a Bowling Green State commit, who poured in a game-high 24 points. Trailing 50-35 at the half, the Gold team was unable to overcome the Black squad in the second half.

Both Turczyn and Jones-Parker had impressive performances on the hardwood for the Gold team and Jones- Parker went on to be the team’s second leading scorer as he dominated in the paint and came out with a 16-point night. Turczyn wasn’t able to put up the same numbers, however, he did make several outstanding plays, including multiple reverse layups, during which he had to drive baseline against players much taller than him, as he did all season at West.