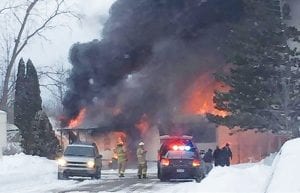 Flames and thick, black smoke roll off a mobile home in Estates of Genesee Valley. The occupants, who lost everything, had just moved in and had yet to purchase insurance.

FLINT TOWNSHIP — A 26-year-old Flint Township woman and her roommate lost everything in a fire that ripped through their mobile home just days after they moved in.

Samantha Jagger was eating dinner when the blaze erupted Feb. 4 on the outside of her home in Estates of Genesee Valley on Elms near Miller.

Park manager Maurice Poffenbarger, who is Jagger’s step-father, said Jagger and her roommate had not had time to buy insurance.

“They were in the process of moving in,” said Poffenbarger.

Poffenbarger said the salamander was two feet from the home and nothing was near it.

“Something got it, though,” he said.

Ringwelski said the trailer was “fully involved” when township firefighters arrived on scene.

“This is our far corner, so it takes longer to get here,” he said.

The Red Cross was assisting the displaced occupants.