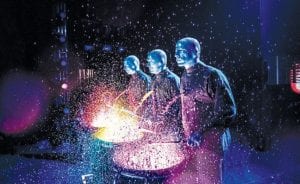 FLINT — After six successful years on the road, Blue Man Group will circle the United States one more time prior to taking the theatrical tour worldwide. Audiences can catch the wildly popular, award-winning Blue Man Group when they return to The Whiting with four performances; Jan. 29 at 8 p.m., Jan. 30 at 2 p.m. and 8 p.m., and Jan. 31 at 2 p.m.

“We live in a fast-paced, ever-evolving world. The Blue Man character is a curious being who explores our cultural norms, our every-day objects, but he sees them with fresh eyes and an innocent perspective. As the world around us changes, we are constantly inspired to create new scenarios for the Blue Man to explore,” said Phil Stanton, Co-Founder of Blue Man Group.

“Plus, we really like to keep things fresh and vibrant. For almost 25 years, although the content within the show varies, the mission of every Blue Man Group show has remained the same – to bring the collective audience together with the Blue Men for a euphoric celebration, a heightened state of being alive,” added Co-Founder Chris Wink.

The trademark of every Blue Man Group show is a combination of visually stunning multi-media, multi-sensory performance. The Blue Men are accompanied by a live band.

Across the country, Blue Man Group has received acclaim. The Los Angeles Times called Blue Man Group “a guaranteed good time.” There’s no spoken language, so Blue Man Group is ideal for people of all ages, languages, and cultures. Don’t miss the show that has captivated 35 million people worldwide. It’s guaranteed to be an outing that your group will never forget. Blue Man Group- enemy of monotony, remedy for boredom, promoter of overjoy and elation.

For the founders of Blue Man Group, the universal appeal is based on our shared human DNA. Phil Stanton elaborated, “We say that no matter how high-tech things get, there’s still something human there. We’ll always need others, always need to collaborate. People still need to come together and look each other in the eye. Through the Blue Man’s connection with the audience, we hope to encourage this human-to-human interaction, while helping people reconnect with their own sense of wonder and discovery, with their own sense of what is possible in their lives.”

Tickets range from $31 -$71, with discounted tickets for children and seniors. Student rush tickets for those 16 or older may be available the day of the performance for $12. To purchase tickets, visit TheWhiting.com, call 810- 237-7333 or visit the Ticket Center located at 1241 E. Kearsley St. just off I-475 between the University of Michigan -Flint and Mott Community College.

Tickets are also available for purchase at The Whiting’s Downtown Ticket Center at the Flint Farmers’ Market. Smart phone and tablet users can download The Whiting App to make purchases.