GENESEE COUNTY — The Blueberry Ambassador 2018 Kickoff Party began with students tossing a giant blueberry colored ball around the University of Michigan-Flint Recreation Center as they laughed and screamed in glee, and the momentum only continued to grow from there.

“There are more than 1,000 of you here today and more who couldn’t make it,” said Marjory Raymer, the program’s emcee.

Over 1,100 kids will participate in the Blueberry Ambassador program this year. Each ambassador is asked to perform three random acts of kindness.

Raymer told the students they wouldn’t be able to do what they do as blueberries if it hadn’t been for teachers, parents and others who’d helped them.

She also thanked many who made the program possible. She said the University of Michigan-Flint gives scholarships for participants in the program and let them use their space for the kickoff. 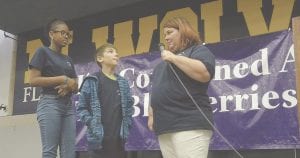 She announced that U.S. Congressman Dan Kildee was in attendance, as well as the Flint’s mayor, Karen Weaver.

“Raise your hands if you’re excited to do things for other people,” said Steve Tunnicliff, associate superintendent for Genesee Intermediate School District

Tunnicliff told the students that’s what the Blueberry Ambassador program was all about.

“You guys are going to think of super cool ideas of things you can do to impact other people, and some of them will be in the newspaper,” he said. “Do one thing. Find one person each day who needs a smile, a pat on the back, somebody to sit with at lunch or whatever it may be and make that person’s day better. I guarantee you’ll feel better about yourself, and we’re going to have a better community.”

Cayla Dowdall, a teacher at Hahn Intermediate School in the Davison Community Schools district, said she’d had the honor of being part of the Blueberry program since Phil Shaltz started it six years ago.

She said the Blueberry program starts a spark in students, which spreads like wildfire throughout the community and she hoped the spark never burns out of the students.

“Oftentimes students are recognized for academic success or strength and abilities at athletic events, but the Blueberry program recognizes kids for being kind,” Dowdall said.

Awards and scholarships will be given at the end of the school year for the best Blueberry moments.

“I think we could all agree being kind is something our world needs a little more of right now,” Dowdall said.

Phil Shaltz said when the Blueberry program started it was to encourage adults to do random acts of kindness. But, it wasn’t until the program was targeted towards youngsters that he felt he had the right group.

“That was pretty cool,” Shaltz said.

Shaltz said that wouldn’t have happened if the program hadn’t been geared to help emphasis the obligation kids have to the community.