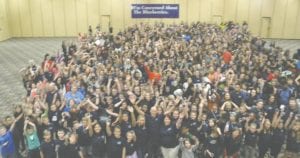 About 1,500 students attended the Blueberry Ambassador 2018 Awards Party and the program› s founder wants the program to grow to 2,000 participants.

FLINT — Although approximately 1,400 students participated in the Blueberry Ambassadors program this year, promoting kindness in our community, the program’s founder wants the program to grow to 2,000 participants.

“You can’t say things aren’t happening around here, and our young people are helping to make it happen because you all are doing random acts of kindness,” Weaver said.

Shaltz began introducing the program in 2013 with a mysterious billboard that captured the attention of many individuals.

As a joke, Shaltz arrived dressed as Yoda because he turns 70 years old this year, and the ceremony’s theme was Star Wars. He threw out blue balls designed to look like blueberries at the students. Shaltz asked kids why they thought people do nice things for other people.

“So many people have bad days and then you can make their day better,” a young girl said.

Shaltz asked how old the young girl was, and when she replied she was nine, he then asked, “Why are all the smart people nine years old?”

Shaltz said he wanted to let the students know why he did what he did. He showed them a slide of his granddaughter, saying he loved her more than anything in the world and wanted to make the world a better place for her.

Shaltz and Marjory Raymer gave out several awards. With 13,873 votes, the People’s Choice Award was given to Woodland Park Academy of Grand Blanc, coordinated by Sarah Doty and Emma Mayberry. The school was awarded $1,000.

The inspirational teacher award was given to Vickie Weiss from Grand Blanc Perry Innovation Center. She has been a teacher for 54 years. A $6,000 full semester scholarship to the University of Michigan-Flint is awarded by the winner of the Inspirational Teacher Award for a student in one of their district’s high schools.

Blue Ribbon awards were given to one student in each school district, with each winning school receiving $100 to continue doing good.

The winner of the 2017-2018 Founder’s Award was Brooke Laine, a student at Davison Central Elementary School. Her school received $500. The class the Founder’s Award comes from gets ‘pay it forward’ by choosing someone from their school to receive a one-year $12,000 scholarship to the University of Michigan-Flint.

For her winning Blueberry moment, Laine said she went to a restaurant and saw a man sitting by himself trying to gather enough money to buy a pop. Laine heard the waitress say “it’s on me.” Heartbroken, Laine got her dad to buy the man dinner and wrote the man a handwritten note that said “You are loved.” In return the man took paperclip angel off a women’s necklace he had on off and gave to the waitress to give to the Laine. Laine explained this made her cry tears of joy.