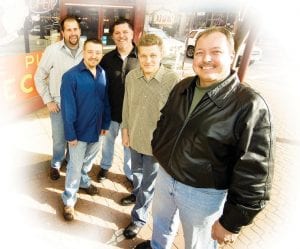 LAPEER
— Music lovers will want to reserve tickets in advance for the next concert at the PIX Theatre in downtown Lapeer. The bluegrass band, Russell Moore & IIIrd Tyme Out, will play Saturday, Nov. 6, at 7:30 p.m.

Russell Moore & IIIrd Tyme Out is one of the most recognized and accomplished bluegrass bands around. Lead singer and founding member of the band, Russell Moore, has won the International Bluegrass Music Association (IBMA) “Male Vocalist of the Year” award three times — first in 1994, again in 1997, and just recently in 2010. The band as a whole has won the IBMA “Vocal Group of the Year” award for seven consecutive years.

The Georgia-based group also tours regularly with the Grand Ole Opry. Their current tour schedule has them in cities around the country, including Northridge, Calif, Miami and Pigeon, Tenn.

A good deal of the band’s popularity and success is due to their amazing vocal and instrumental talent. “It’s not the easiest music to play,” said Russell Moore, “but we have some of the best instrumentalists in this band.”

Their popularity may also be attributed to the fact that IIIrd Tyme Out was one of the first bluegrass bands to mix traditional bluegrass, gospel, and contemporary secular music in their albums and concerts. The fans grabbed onto the mix quickly, and more “traditionalists” accepted it in time, said Moore. “It wasn’t bluegrass, but it was good music.”

The band released their latest album in 2009, self-titled “Russell Moore & IIIrd Tyme Out”. Their current tour is aimed at highlighting many of the songs released on that album.

However, Moore says the band still plays many of the fan favorites and traditional bluegrass songs from years back.

Anyone in the audience can expect to have a good time, which is exactly what the band says they plan to do. Their a capella renditions of songs mixed with a rich blend of vocals is sure to please anyone as they showcase a list of traditional and contemporary songs.

Michigan is hardly known for being a popular bluegrass birthplace or destination, but that doesn’t seem to bother Russell Moore & IIIrd Tyme Out. The band says they love to play in new venues and areas and introduce their music to fresh audiences.

The band has already started recording in the studio for the next album, which they hope to release sometime in the spring of 2011.

The band says that it is the fans that allow them to continue recording and going on tour. “We don’t lose sight of that,” said Moore, adding that the band is very “humble, gracious and grateful.”

Tickets are $25 for adults and $24 for students/seniors if purchased in advance. Tickets purchased at the door are $28 for adults, $27 for students/seniors. The PIX is also offering a special Bluegrass Package for $32, which includes the IIIrd Tyme Out concert and the Cats and the Fiddler concert, which takes place the next day.

For more information on the band, visit www.iiirdtymeout.com.
For details about the show or to purchase tickets, call the PIX Box Office at 810-664-4824 or go to www.pixlapeer.org.