I remember a time when each day was long,
When the world was a playground and my life was a song,
And I went through the years with barely a care
Ignoring the future and what waited there.

But as I grow up, darkness starts to set in
My bright world has turned into concrete and tin
I now see the violence I looked past before
My friends start to die and my heart hits the floor.

Deadly disease claims people I love
There are landfills below me, pollution above
I often think back to when life was a game
But no matter what happens it can’t be the same.

There are days when I just want to break down and howl,
To give up completely, to throw in the towel,
But I hold my head high and I push my way through
I have so much to give and so much to do.

And I make a vow that, though it’ll be hard
I’ll go on with a smile and play every card
I’ll give all that I can, help others and love
No matter what happens, life will bloom again
And the strength I don’t have will come from above. 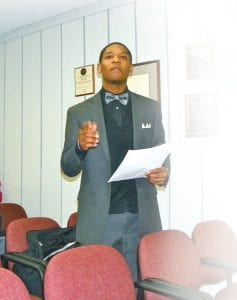 FLINT TWP. —Those uplifting lines are excerpted from a 10-verse original poem by Qua’Von Kelly, an 11th grader at Carman Ainsworth High School, who shared the limelight during a special recognition of students at the School Board meeting Tuesday night.

Superintendent Bill Haley said he heard Kelly recite his “inspiring” poem a year ago and had been trying since to get him to a board meeting for an encore.

The board also recognized several athletes who signed letters of intent last week and the student group Empathy for All which garnered high praise and publicity last month for presenting flowers to Flushing parents and students during a varsity basketball game, as a thoughtful gesture, in the aftermath of the deaths of two Flushing students in a two-week span.

“That night we just wanted to do something to show them that we had some compassion for the situation that they were going through,’’ said Jalen Walker, who spearheaded the effort and was commended at the school board meeting with other EFA members.

Haley shared an e-mail from Flushing superintendent Timothy Stein, praising the presentation as “one of the most inspiring events in my 25 years as an educator.”

“This single act of kindness on the part of your students reminded me that even in the darkest time an act such as this fills you with optimism abut the future,’’ said Stein, who added that it made him proud to be a C-A alumnus.

C-A Board president Patrice Hatcher added her praise: “We can do policy but I think what you’re doing is much more powerful,’’ she said of EFA’s primary focus on antibullying education.

Star athletes in attendance at the board meeting included Brandon Lenoir, Myles Overton and Shane Barron who will play football at the University of Northern Colorado recruited by C-A graduate Terrance Robinson, now UNC’s director of football operations.