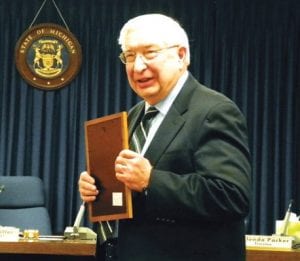 Richard Ruhala received special recognition from the township board for his service in several capacities, most recently on the planning commission.

FLINT TWP. — Richard Ruhala, a well-known attorney, was recognized at the township board meeting last week for 37 years of public service.

A proclamation issued by the township board acknowledged him for serving as a township trustee from 1984 to 1990, for 17 years on the Planning Commission and five years on the Economic Development Board.

He was cited as an exemplary citizen and outstanding public servant and for his dedication to the community and for being a “sterling example” for all in public service.

After accepting a framed proclamation from township supervisor Karyn Miller, Ruhala commented to township economic enhancement Tracey Tucker that it was her father, former township supervisor Galen Jamison, was the reason he entered public service as part of a team of trustees.

After 16 years, Ruhala said he also was persuaded to run for a judgeship.

Most recently, Ruhala stepped down from the Planning Commission.

“You’ve got to know when you reach a certain age, it is time to let the younger members and active citizens in the community step forward and get a chance to serve also,” he said,

He also thanked his wife Arlene for being supportive of the time he spent in public service work.