Board members sworn in, officers named 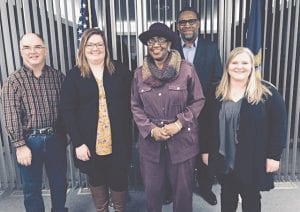 FLINT TWP. — The Carman-Ainsworth Board of Education’s first official act of business for the new year was the swearing in of Board Members.

Board Members voted to re-elect James Johnson as president; Gary Cousins as vice president; Lisa Koegel as secretary; and Lonney Jarnigin as treasurer.

Nealy, Dahl and Crane will serve as trustees. — G.G.