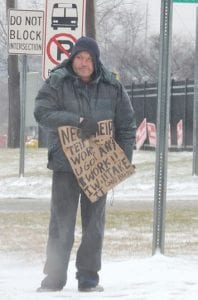 FLINT TWP. — Under threats of potential law suits and political retaliation, the township board of trustees narrowly passed a controversial Traffic Safety Ordinance, after a public hearing Monday night attended by a nearly full house.

Approved to take effect on March 1, the ordinance regulates interference with motor vehicles on public streets by prohibiting money or any other object to be passed, without authorization, from or into a motor vehicle operating on a public street, except for emergency services and repairs.

Emphasis is being placed on public safety but the ordinance responds to a yearlong search for solutions to the township’s growing panhandler problem. Members of the audience spoke for and against the proposed ordinance

The ordinance was among solutions recommended by a specially appointed committee, established last summer to find solutions to the problem.

Citing vagueness and other questions about interpretation, opposing votes were cast by Township Clerk Kim Courts and trustees Belenda Parker and Barb Vert.

Court said she voted no because she has not been able to get a satisfactory answer about who is authorized to give groups like the Olds Newsboys temporary permission to solicit in the streets. The Old Newsboys is among local charities affected by the ordinance. Chris Hamilton, Old Newsboys executive director, was a member of a special committee that recommended the new ordinance. Hamilton said after the vote passed that he still was not pleased with the lack of clarity on how organizations like his would receive authority to conduct their drives. The Old Newsboys holds its street drive once per year in December.

Courts stated that she did not vote against the ordinance because she felt threatened by objectors in the audience who said enforcing the ordinance would lead to law suits and recalls.

“I think we need to clarify who gives permission (for temporary street soliciting such as by charities) before we move forward,” Courts said.

Trustee Vert who has been very vocal about scam artists pretending to be poor said she voted no because the ordinance was unclear and had too many loopholes. But Vert citied information she found online stating that 90 percent of street beggars are scammers who are not really poor. She also said she once followed one home to a nice house outside of the township.

Parker said she voted no because of the authority question and vagueness.

When the committee presented the ordnance in October, it was thought that the Genesee County Road Commission would be the authorizing agency because it governs most major township roads. But road commission officials have said that the township board can act as the authority.

William Newsom, who served on the Begging and Solicitation Committee, raised the point that the road commission acted as the permitting authority last summer when it required a $100 permit from a volunteer group from Lowe’s to beautify a traffic divider off Linden Road that was being heavily used by a panhandler. Lowe’s had to pay for a permit only to have the panhandler trampling on the landscaping effort without benefit of a permit from anyone, he said.

He said the ordinance is a “good plan” to handle professional panhandlers.

Glenn M. Simmington, an attorney and township resident, said the ordinance could lead to a challenge in federal courts. Restrictive panhandling ordinances have passed muster in lower courts for municipalities on the western side of the state. He said the history of the Flint Township ordinance indicates that it is being passed to curb panhandling though it is now be framed as a traffic safety measure. The courts would look at the reasoning behind the ordinance, he said.

Township attorney Peter Goodstein was on hand to answer questions about legalities of the ordinance, which he wrote. He made it clear that if the township becomes the authorizing agency it would nullify the ordinance because it would be required to issue permits indiscriminately. In other words, it could not give permits to charitable groups while turning away street solicitors requesting permits. Equal treatment has already been established as a freedom of speech right by the courts.

Goodstein also said the ordinance does not ban street beggars. They can still stand on the street with a sign and direct donors to a place off the roadway, such as to a parking lot, where they can legally accept the money.

A second recommendation from the committee is to establish ways to help street beggars and homeless people.

Supervisor Miller said the United Way, at its own expense, is preparing resource cards to give to panhandlers listing places they can go for help. She said a committee was being formed to help those who are truly in need.

The full text of the new ordinance is posted on the township web site at www.flinttownship org.