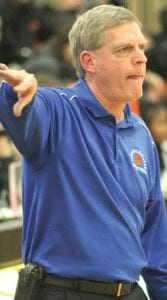 Root’s coaching career began in 1978 at Flint Northern as a 22 year-old. He coached at Northern for six years before coaching at Ainsworth High School for two years. Ainsworth merged and Root became the coach of Carman-Ainsworth for the next 12 years. After 20 years, Root resigned and took nine years off before coming back to coach the Cavs for the last six seasons.

Root is finishing his 13th year as athletic director and finished his 26th season as a head coach in the winter with 381 victories. Root did not want to do a disservice to his athletes and felt it was best to step down.

“I guess I don’t have the energy and desire to put in all the time in the offseason that is required,” said Root. “That is when you work with kids to improve their games and make them better basketball players.”

Root’s teams routinely challenged for league and district titles and his squad this season won the Saginaw Valley League-South title in its first season in the league. As much success as Root had, he had only one regret. “The one regret I have is that we never made it to Breslin,” said Root, referring to the Breslin Center where the state finals are held. “We had some very good teams, but we always seemed to run into better teams. We lost in the regional finals a couple times to Mateen Cleaves and Flint Northern. And our undefeated team of 20-0 led by Jon Runyan at center, lost in its first game to Flint Northwestern.”

The Cavaliers did reach the Breslin after Root resigned the first time led by Root’s replacement, Rory Mattar. The Cavs fell to Rockford in the 2003 finals, 41-38, and lost to Lansing Everett in the 2004 finals, 60-51.

Root will be replaced by former freshman and junior varsity coach Jay Witham. Witham is a former player for Carman-Ainsworth and is the right man for the job, according to Root. “He has been with the program for a while now and is a former player here. Jay is firm and will hold the guys accountable and make them earn the right to play. He knows how to motivate the kids and does a good job of relating to kids today.”

Root was known as a good basketball coach, but he also wanted the best for the student-athletes. Root sent numerous players on to play basketball at either a two- or four-year college highlighted by current Carman-Ainsworth senior Denzell Watts, who will play at the University of Alabama-Birmingham in the fall.