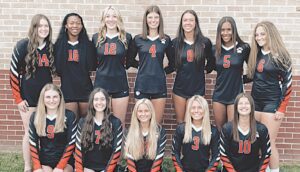 GRAND BLANC — The Grand Blanc Varsity fans will see six girls returning from the 2020 Regional Champs & State Quarterfinal team, and six new competitors have been added to the roster; giving the seasoned core group of players the opportunity to teach and mentor the new younger athletes joining them.

The only junior returner is last year’s SVL MVP, 1st team All-Conference, All-Region and All-State Honorable Mention powerhouse outside hitter, Remi Madison. Madison is surrounded by a great team of seniors that are ready to lead this team back to defend their Regional Title and make their way back to States again this year.

All-Conference Honorable Mention teammates, Kate Walter and Taylor Ringwelski, are ready to up their game and become forces to be reckoned with. Grand Blanc is looking for Walter to be a dominant force in the middle, while Ringwelski brings her setting talent and defensive prowess to the back row to defend and set her teammates up for offensive success.

Senior pin-hitter Kendal Inman, who has flown under the radar but is listed among Prep Dig’s 2022 Player Rankings, will be a huge part of Grand Blanc’s offense.

“We are moving her to the right-side where she can use her blocking skills and dynamic swing to be the opposite to Madison on the other side of the court. Kendal has all the tools, and this year we will get to see them,” said Coach Renee Madison.

The remaining senior cast, Avery Haviland and Maddison Bourbeau, are pushing each other to become dynamic defenders. Haviland also has a nice swing, so she could be used offensively as well. Bourbeau has a wicked left-handed serve that she is perfecting to be a force from the service line along with her willingness to rundown balls on defense.

New to the team this year are Juniors Natalie Serafinski, Madison Stevenson and Paige Anderson. Serafinski will be opposite Walter as the other middle. As the season progresses, she will step up and in to that role more confidently making things happen for the Bobcats. Stevenson is a pin-hitter that can be used on either side of the court making herself another key player on this year’s squad. Anderson is learning and following in the footsteps of the defending upperclassmen: Ringwelski, Bourbeau and Haviland.

Sophomore setters Skylar Cramer and Brooke Gervers are getting more assertive in their role as floor generals for this year’s squad.

“They will be a dynamic part of the Bobcat offense hopefully for the next few years to come,” the coach said.

“Taylor has been a phenomenal mentor for these young setters and is ready to keep pushing them so she can use her defensive skills to impact our team this season.”

Last, but certainly not least, is the final member of the 2021 team, Sophmore Laila Bates. Bates can hit from anywhere in the front row. Trained as a middle last prep season and during club, Bates has taken her game to the pins where she can bring her attacking power and blocking ability to disrupt her opponents and get some points for the Bobcats.

The 2021 Grand Blanc Varsity Volleyball squad is looking to get heads turning and bring this team closer to the top of the Division 1 rankings this year and for years to come. — L.R.