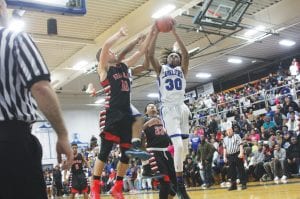 Carman-Ainsworth’s Terry Armstrong gets a firm grip on the ball in a rebound battle with Grand Blanc’s Zach Leedom during Tuesday night’s game at Carman-Ainsworth.

FLINT TWP. – Jaylen Rutherford scored on a baseline drive with 22 seconds left to break a tie, and Austin Roland iced it with two free throws with :07.5 showing as Grand Blanc edged Carman-Ainsworth 58-54 in the boys’ basketball season opener for both teams Tuesday night at Carman-Ainsworth.

The lead changed hands several times throughout the game until Rutherford, who almost lost the ball in the corner just prior to his drive, broke loose for a finger-roll layup and a 56-54 Grand Blanc lead.

Carman-Ainsworth then turned the ball over under the Bobcats’ basket and Grand Blanc ran the clock down to 7.5 seconds, when Roland was fouled and swished both ends of a 1-and-1 to seal the win before a packed house.

Zach Leedom scored 15 points on three 3-pointers and grabbed 10 rebounds, and Rutherford finished with 13 points as Grand Blanc won the traditional opener with its former Big Nine Conference rival for the fourth time in five years. Jackarus Smith and Lon Martin added eight points each for the Bobcats, while Roland and Cam Cyborowski scored seven apiece. All four are sophomores.

“Nick Scott brought energy, toughness and great team defense to help us push it over the edge,” said Grand Blanc coach Rob McRae. “Our players played their tails off and left it all out on the floor to come out on top.”

The Bobcats took a 20-13 lead in the first minute of the second quarter as Leedom scored eight points in the first quarter and 10 for the half. But Carman Ainsworth finished the half on a 16-6 run to take a 29-26 lead into the locker room.

Leedom, who got into a verbal confrontation with Jaylen Bradley late in the third quarter, sat out a good portion of the second half with four fouls. The Bobcats also lost Scott and starter Cyborowski to fouls in the fourth quarter.

Duncan led Carman-Ainsworth with 18 points, including 14 in the second half.