FLINT TWP. — At noon on Thursday, Dianne Koblinskii, a township resident, expected to be at her job transporting vehicles for Hertz which is located at Bishop International Airport.

Instead she was restricted to the farend of the rental car parking lot along with about 200 airport employees and travelers during a three-hour airport evacuation due to a bomb scare.

Airport officials evacuated the building after an unattended bag was found containing unidentifiable electronic parts and wiring. “We did not know what it was,” said Craig Williams, airport director, in a press briefing. “We called in local and state police to get a secondary look, just in case it was an explosive device.” A bag check proved that the device was not an explosive but as a precaution, six teams of dogs were brought in for a complete airport sweep that turned up no further problems. The entire event lasted about three hours, beginning at about 10:10 a.m. when the bag was discovered, and ending at about 1:10 p.m. when the Michigan State Police bomb squad completed the sweep and left the premises. During the evacuation, all entrances to the airport was sealed off though traffic was allowed to continue passing on Bristol Road in front of the airport. Two passenger planes with an estimated 200 people aboard were allowed to land but not approach the terminal. They waited at the far end of the tarmac until the “all clear’’ came about 1:20 p.m. The stranded passengers were accommodated with food and water during their wait, as were the passengers and employees evacuated from the building, Williams said. A person associated with the suspicious bag was taken in for questioning by the Flint Township Police, Williams said. No charges were reported filed and the bag was returned to the owner at the conclusion of events. By mid-afternoon, Incoming and outbound flights were on schedule and the airport resumed normal operations. Williams praised the emergency crews for their response. “The teamwork on this was first rate,” he said of responders that included Flint Township Police, Flint Police, the FBI, Genesee County and state police and resources from as far away as Lapeer. “I can’t thank them enough for getting us back to normal operations, “Williams said. He also said the false alarm was a good learning experience. The airport conducts annual emergency and tabletop exercises to make sure it has an effective emergency response in place. “So far I will say this has turned out well,” Williams said, adding that airport officials will also do an after-event analysis “to make sure we learn from this live-action event.” 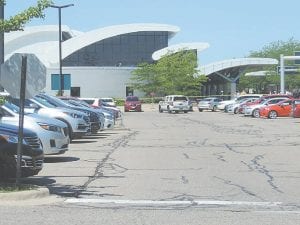 Police blocked off all entrances to the airport during the three-hour evacuation.