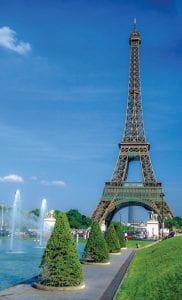 FLINT TWP. — Travel to Paris, France still is considered safe in the aftermath of a recent spate of terrorist’s attacks.

As of now, no travel alerts or warnings are in effect from the U.S. Dept. of State Bureau of Consular Affairs.

That’s good news for a small group of Carman- Ainsworth High School students and teachers who are looking forward to spending a week in Paris in April.

“The terrible events in France have certainly been on our minds here,” said Brenda Love, a CAHS French teacher, who is leading the trip. “They (terrorist activities) have not impacted our trip (plans) at all.”

Love said there have been some class discussions about the January 7 terrorist attack on Charlie Hebdo, a satirical magazine known for publishing anti-religious cartoons. According to news reports, Muslim gunman forced their way into the newspaper office, gunned down 12 staffers and wounded 11others. Four hostages were killed two days later before police killed the assailants.

High security alerts in France have since been lowered but vigilance of terrorist activity continues, according to news reports.

The CAHS group is planning to travel during spring break in early April. They will be traveling with a leading worldwide organizer of student trips that has been in business since 1967.

Love, one other teacher and four students will be going on the trip.

“I talked to one of the students who was a little worried and told her we don’t have anything to be concerned about for our safety,” Love said.

Susan L. Hiltz, public affairs director for AAA Michigan, which has a travel service, said she did not have information about any other Flint-area travelers to the City of Lights.

Currently, U.S. government officials are not recommending that Americans avoid European travel or cancel vacation plans but encourages them to be extra careful and have a heightened sense of awareness, according to AAA.

U.S. citizens traveling abroad can regularly monitor the Department of State’s website at www.travel.state.gov where country-specific information, travel warnings and travel alerts can be found.

“Political violence in Paris and throughout France is relatively uncommon, although there are occasional instances of extremely large demonstrations simultaneously occurring in many French cities,” according to the state department.

“Over the last few years, there have been arrests of suspected militant extremists allegedly involved in terrorist plots. French authorities have spoken publicly about the heightened threat conditions for terrorist attacks in Europe.”

U.S. citizens have not been specifically targeted in terrorist attacks in France recently.

AAA also strongly recommends that U.S. citizens traveling abroad join the Department of State Smart Traveler Enrollment Program (STEP). That includes providing a phone number and email address to make it easier for the consulate to contact travelers in an emergency and to provide safety updates.