Booksale at McCarty a success 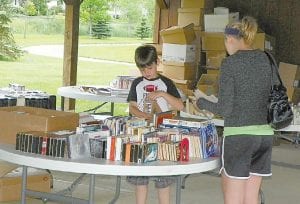 FLINT TWP. — Perhaps cooler weather and rain put a damper on early morning crowds at Friday’s Used Book Sale at the GDL McCarty branch but it did not stop Gavin Dolliver, 8.

On his first day out of school at West Shore Elementary in Fenton, Gavin came to buy a bag of books for summer reading. There was an array to choose from including novels, children’s books, videos and books on tape. Some were donated and some out-of-circulation library books.

The one-day sale was organized by a new group tentatively calling itself “Friends” which included Gloria Nealy, a trustee on the Carman Ainsworth Board of Education and Linda Barber, former Flint Township supervisor.

Proceeds from the sale will benefit Coins for Carpet, an effort to raise money to buy new carpet for the library, organizers said. The Friends plan to hold another book sale during the second week in July.

Nealy said the “Friends” also hope to encourage people to read, bring their children to the library and support the library. The library hosts a lot of free activities, she said.