Borders closes its doors for good 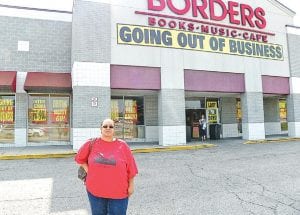 Sonya Henderson of Flint left empty-handed but was among the last shoppers during the final half hour of business Tuesday before Border’s bookstore closed for good.

FLINT TWP. — Shortly after noon Tuesday, two Borders employees placed a tall red ladder in the center of the nearly vacant sales floor at the Miller Road store. One held the ladder while the other climbed up to cut down a 90-percent-off sales sign suspended from the ceiling.

It was reminiscent of NBA teams cutting the net from the basketball rim as a victory souvenir but this ritual act signaled a dismal defeat. The sign was ripped in half and tossed in the trash with others being collected from around the store.

Soon after came the somber announcement: “Attention Borders shoppers, the time is now 12:55 and Borders will be closing in five minutes.”

It marked a sad end of the story for the Miller Road location that opened in November 1996 and quickly took over the market. On Monday, the Ann-Arbor based flagship store also shut its doors for the final time, after a 40-year run. Borders began as a single store in 1971 and grew into a 642-store national chain.

Analysts say Borders ran into trouble when it reacted too slowly to keep pace with technological advances in music and electronic book reading.

In February the struggling company filed for Chapter 11 bankruptcy protection and closed several stores. In July, after failing to find financial backing, it decided to close its 399 remaining stores.

A liquidation sale that began in July served to clear out inventory. By Tuesday, after a final days discount of 90 percent or more, only about 100 or so books remained on the shelves which also were being dismantled or sold.

In the final hour, less than a dozen customers were browsing through the remainders being sold for $1 or less.

She came hoping to find a good deal on a dictionary but Borders has long been her favorite place to buy books by black authors or grab a cup of coffee and read magazines.

“I sure hate they’re going out of business,’’ she said. “Guess I’ll have to go to Barnes & Noble,’’ she said of the rival national bookstore chain also on Miller Road. Henderson said she liked Borders better because it was easier to find what she wanted.

Judy Henderson of Flushing also was among the last shoppers. She left with a small bag of books and also had visited the store the day before.

“I’m going to miss it. I’ve bought a lot of books and gift certificates here over the years,” she said.

AlsonotaB&Nfan,Hendersonsaidshe’ll probably buy books in the future at library sales.

A Borders employee locked the doors promptly at 1 p.m. but hopeful customers still were coming 15 minutes later only to walk up to the doors and find a sign posted informing them that the book store was closed.