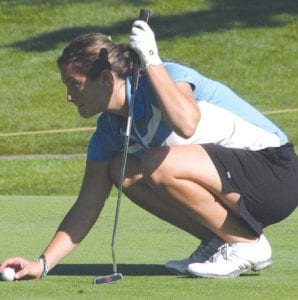 Meghan Borgerding has her eye on a state qualifying berth next year, after falling just short this time around.

HIGHLAND — Meghan Borgerding keeps getting closer to a spot in the state golf tournament.

The Carman-Ainsworth sophomore went to a twohole playoff before missing out on the third and final individual qualifying berth at last Thursday’s Div. 1 regional at Prestwick Village Golf Club. She lost to Midland sophomore Amanda Walsh, who advanced to play in the state finals Friday and Saturday at The Meadows on the campus of Grand Valley State University.

Both players shot 85 during regulation, tying for seventh place overall. Borgerding sank a 15-foot putt on her last hole to force the playoff.

On the first extra hole, she missed an 18- inch par putt that would have won it. The players returned to the 18th tee for the second sudden-death hole, and this time Walsh got up-and-down from the rough to win it.

Last year, Borgerding came within 10 strokes of going to state.

“She played very well and really hung in there,” Carman coach Bob Blaylock said of her near-miss this time. “She cried a little bit afterward, but it just made her more determined to do it next year.”

Carman shot 472 to finish 13th as a team. Selena Johnson shot 106, Taylor Tolbert 129, Morgan Genore 152 and Keri Hart 174. Johnson is a junior and Tolbert and Genore are sophomores, so the Cavs should return four starters next year.

Fellow Big Nine Conference member Davison won the regional with a 347, one stroke better than Brighton. Host Milford earned the third and final team qualifying berth with a 358.