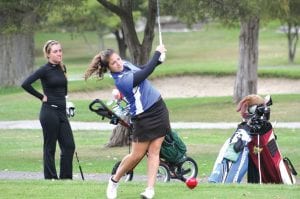 Carman-Ainsworth’s Meghan Borgerding tees off during the regular season.

EAST LANSING — In her final performance as a Carman-Ainsworth Cavalier, Meghan Borgerding traveled to the Div. 1 state finals on Friday and Saturday at Forest Akers West on the campus of Michigan State University where she shot a first-day score of 97 and a second-day tally of 85 to end the tournament with a 182.

Plymouth would win the state championship with a 706, Rochester Hills Stoney Creek was second with 710 and Troy took third with a 711. Individually, Grosse Point South’s Lily Pendy won it all with a 150, Elayna Bowser of Dearborn placed second with 156 and Emily White of Saline came in third with 157.

The tournament not only ends the season for the Carman-Ainsworth girls’ golf team, it also closes out Borgerding’s stellar high school career, solidifying herself as one of the area’s top golfers. — B.P.