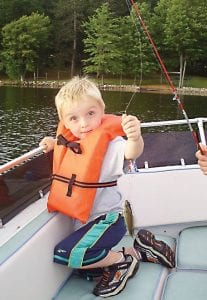 Every day the memory of murdered Dominick Calhoun, 4, inspires his family and friends to not only find him justice, but to help other children like him by raising awareness on child abuse.

GRAND BLANC
— A Bowl-A-Thon has been scheduled to raise awareness of child abuse in honor of a 4-year-old Argentine Township boy who was beaten to death back in April.

Dominick Calhoun’s body was found unconscious on a bedroom floor of the apartment he lived in with his brother, mother and his mother’s boyfriend. According to police reports, the beatings lasted four day before Dominick was brought to a hospital on April 11. The following day, he passed away after being taken off of life support.

Corine Baker, Dominick’s mother, and her boyfriend, Brandon Hayes, both face charges in his death.

Interested in helping out the Calhoun’s cause, Rhodes contacted Donna Hasman, administrator and creator of Dominick’s Law on Facebook, pitching the idea of hosting a Bowl-AThon.

“We were just floored when Sam’s Club contacted us,” Hasman said. “They wanted to see how they could help and offered to sponsor this event for us.”

Sam’s Club is very prominent in the community, giving out various grants every month, but Rhodes said it is rare they get to help out causes such as the Calhoun’s on this level.

“This is something kind of fun because we don’t normally get to do events for smaller organizations like this,” Rhodes said. “We usually just end up donating to these causes so to do this is huge.”

The event will run from 7 p.m.- 9 p.m. on Nov. 7 at Grand Blanc Lanes, 5301 S. Saginaw St., and includes unlimited bowling and shoes. Also featured at the Bowl-A-Thon will be a silent auction, raffle and various Dominick Calhoun gear such as Tshirts, hooded sweatshirts, bracelets and stickers for purchase.

“We are so thankful that Sam’s got a hold of us,” Rick Calhoun, Dominick’s grandfather said. “We are doing a bunch of great stuff here and we are going to make Dominick’s name a national name here sooner or later.”

Tickets for the event are $15 for those 18 and up and $10 for children 17 and under. Tickets will be sold at the door, however, those interested in purchasing tickets in advance can contact Rhodes at the.sarah.rhodes.experience@

Rick said 75 percent of the proceeds raised will go toward the renovation of Whaley Children Center’s homes.

“We did a tour of the homes and the homes are nice, but they have no character for these kids,” Rick said. “So some of the money raised will go for renovations. We will go in there while the kids are in school and give them a little haven and just a little bit of peace.”

The remaining 25 percent of the proceeds will go to help fund the Dominick Calhoun Memorial Amphitheater, which will be build in Linden’s wooden playscape park. So far Rick said family and friends have raised just over $11,000 of the $50,000 needed to build the amphitheater.