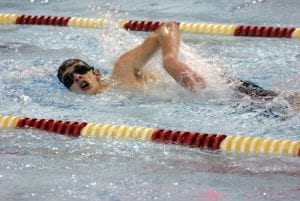 “Prior to this, I was the JV Girls Coach at Flint Southwestern Academy for two years,” said Simon. “I have worked with the junior bowling program for over 15 years and have league bowled myself for over 25 years. Although I coached elsewhere, I knew all of the returning girls from last year, since my daughter is part of the team.”

“Last year, our biggest competitor was Davison, but personally I feel we have more talent returning,” predicted Simon. “Every match is important and we can’t take any team for granted. We must give our best in all matches, from the first frame to the last.”

Simon believes her squad has the goods to back up her prediction. After a second-place finish in the rugged Saginaw Valley League-South, a berth in the state quarterfinals and three girls competing in the state meet. We came in 2nd in the Saginaw Valley Conference last year. The Lady Cavs also hold the SVL record for a two-game series with 2,010.

“Shamonica is expected to play a key role in our success this year,” added coach Simon. “She ended the season with a 204 average, while being selected to the Saginaw Valley All Conference First Team, placing sixth in the Saginaw Valley Singles Tournament. She holds the SVL Individual High two-game series record with 513, and was selected for the All State Second Team.

“Kenzey Lord will also play an important part as a team leader, finishing last year with a 185 average, also being selected to the Saginaw Valley First Team and placed 12th in the Singles Tournament and getting named honorable mention on the state level.

“Kassidy Lord, our only left hander, will pick up the scoring lost by our graduating senior, Quinisha Burnett, while improving on what I know she is capable of. She placed 20th in the Singles Tournament and SVL honorable mention last year.”

Yakira Hughes is Simon’s diamond in the rough.

“I think the other schools will need to look out for her,” Simon said. “I have seen such an improvement in her game so far this season. In a scrimmage against Kearsley, it was Yakira who kept us in the game, as we moved toward the victory.”

It’s all about the team, though, says Simon.

“Not to leave the others out, everyone is important, because my motto is, “We win as a team, We lose as a team”. All in all, I am looking for a great season, not only in wins, but as I work with a matured group of wonderful young ladies as we represent Carman Ainsworth High School.”

After assisting on the varsity last season, Nunn takes over at the helm looking to return the boys’ squad to the state meet.

“I am looking forward to a very successful season that will hopefully lead us back to the MHSAA state finals again,” Nunn said.

“Our key match-ups for the season will be Saginaw Heritage, Bay City Western and of course, Davison.

“Hopefully, we will be heading to Sunnybrook Lanes in Sterling Heights, which will be the host of this year’s state finals,” added Nunn.

Hoping the team reach that benchmark are the three veterans—Wright, Mclean and Adams, but Nunn calls his three sophomores “sensations” and they could just help the Cavs punch their ticket to the state finals. — L.P.

Season Outlook: “(It) should be a good season. A lot of new talent coming out and a good amount of returners.” — B.P.