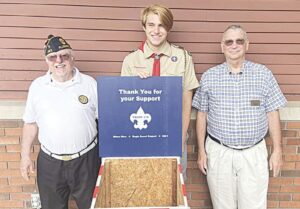 FLUSHING — In pursuit of becoming an Eagle Scout, Flushing Boy Scout Ethan Rice came up with a project idea that’s both practical and patriotic.

Rice, a member of Boy Scout Troop #115, has built a flag retirement box to store old or unusable American flags. Residents who need to dispose of an “Old Glory” that’s become worn, torn, faded or soiled can now stop by the Flushing Area Historical Society Museum (also known as the Flushing Depot) and drop off their flag so that it can be properly and respectfully disposed of.

To find a good location for his Eagle Scout project, Rice worked with the historical society and the American Legion Post #283, which holds its regular meetings at the Depot.

“I’m very thankful to the Flushing Historical Society and the American Legion to have the box at the Depot,” he said. “It allows for more people to respectfully honor and retire the American flag. That’s very important to me.”

For the time being, Rice and his troop will monitor the box and pick up flags to be prepared for a proper retirement ceremony. American flag retirement ceremonies are often undertaken by Boy Scouts of America troops, and some American Legion and VFW posts also perform them.

Rice, who’s participated in two American flag retirement ceremonies with his troop, said that the scouts typically recite the Pledge of Allegiance and assign a moment of silence for each flag before incinerating them. Some ceremonies are more elaborate, with scouts methodically dissecting the flag and speaking about the history of the flag before it is destroyed (where it was flown, how long it was flown, what the stars, stripes and colors of the American flag represent, etc.).

“It’s a humbling, reverential experience,” Rice said about the ceremonies.

Matthew Hartman, Vice President of the Flushing Area Historical Society, said that the museum is proud to host the flag retirement box.

“We found out that there were many people who have been holding onto their flags for a long time, mainly because they haven’t had a formal way of disposing them,” he said. “Now that we’ve gotten the word out about it, people are already turning some flags in. It’s a pleasant surprise.”

Hartman, whose son is an Eagle Scout, said that Rice’s project represents an important first step in the flag retirement process.

“It’s the same as honoring people in life and death,” he said. “When we honor people who have died, we celebrate their accomplishments and treat them with respect in their passing. The same rules apply to honoring an American flag that can’t be flown anymore. We just don’t throw it away…we honor what it represents—the symbol of our freedom and the men and women who have died to secure our freedoms.”

American flags that are ready for retirement can be dropped off at any time at the Flushing Depot, which is located on 431 W. Main Street in Flushing.