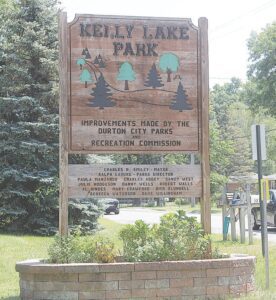 Part of Brandon Craig’s Eagle Scout Project will include touching up the entrance sign to Kelly Lake Park off Lapeer Road. Photo by Gary Gould

BURTON — Brandon Craig, from Boy Scout Troop 178, recently proposed doing his Eagle Scout project at Kelly Lake with a plan to strip and re-stain the pavilion and picnic tables there.

Brandon took the proposal to the Burton Parks and Recreation Commission July 14, where he gave a report on the condition of the equipment at the park and what his plan is for making improvements.

He said he would start by re-staining the pavilions by the parking lot and the 12-13 picnic tables located throughout the park, all of which have been exposed to the elements for years now and are beginning to chip and peel.

“I’m thinking that would be a good Eagle Scout project,” he told the commission members. “I want to strip off all the old stain one day and the next day go out and stain everything with a couple of coats.”

Commissioners raised questions about whether there are electrical outlets at the park, located off Lapeer Road between Belsay and Genesee roads.

Jim Craig, one of the commission members and Brandon’s father, said he would provide battery powered equipment for the Scouts and volunteers to use.

“The pavilion doesn’t look like it needs to be stripped, so I can touch that up, so it looks a lot nicer,” Brandon said. “Then I’ll re-stain all the wood and ceiling underneath. Hopefully I will have a lot of people there to help me.”

He said he is currently looking for volunteers, in addition to those from the Boy Scout Troop who will be pitching in.

“Whenever someone does an Eagle Scout project in my troop, a lot of people come out and lend a hand,” he said.

Jim Craig told the Burton View that while a date for the project to begin has not been said, he said he expects it will happen just before or after Labor Day.

Brandon said he is currently working to raise funds for the project so it will be of no cost to the city. He is also going to the Burton Kiwanis Club for any assistance they can offer, since the pavilion at the park was donated by the Kiwanis.

Members of the parks and recreation commission offered their support for the project.

“I’m looking forward to it,” said Jeremy Scharrer, chairman of the parks and recreation commission. “The park definitely needs some TLC.”

Brandon said he expects the cost for materials to be less than $500.