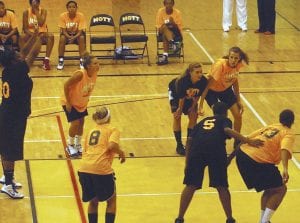 Some of the best basketball talent in the area took the court for the Bruin Club Classic All-Star games last week.

FLINT — Carman- Ainsworth’s Jasmine Boyd was a multi-sport athlete for the Cavaliers and probably thought once she graduated, she would not have another chance to play in a high school game. That changed last Thursday, as Boyd was selected to participate in the annual Mott Bruin Club Classic.

Boyd was a member of the Black squad that fell to the Gold squad, 88-83. Hamady’s Arlesia Morse was MVP of the Gold team with 28 points, while Hamady teammate Porsha Fluker was named MVP for the Black squad.

The boys’ game featured players from city schools versus players from suburban schools that resulted in a 119- 98 victory for the Gold (City) team. Flint Northern’s Shaq Smith was Gold MVP with 20 points with Goodrich’s Trevor Lucus taking the honor for the Black squad.