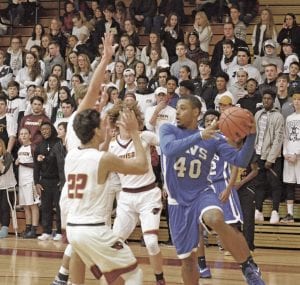 Carman-Ainsworth’s Troy Brown looks for a teammate to pass to as a group of Davison defenders close in on him.

LAKE FENTON – Carman- Ainsworth put up 25 points in the third quarter and went on to defeat Lake Fenton 60-43 Tuesday.

The score was tied 21-21 at the half. Both teams scored 14 points in the fourth quarter.

The Cavaliers shot 62 percent from the floor for the game. O’Mari Duncan had 18 points, five rebounds, three steals and two assists.

Jalen Miller had 18 and Isaac Golson added nine for Lake Fenton. The Cavaliers play a doubleheader at Flint Powers on Friday. The girls play at 6 p.m. and the boys’ game is slated for 7:30.

The Cavaliers defeated Saginaw Heritage 76-55 Friday after jumping out to a 14-4 lead after one quarter.

The Cavaliers stretched their advantage to 34-10 at the half with a 20-6 scoring edge in the second. Carman- Ainsworth used a variety of presses to force the Hawks into several miscues.

“We saw on film that if we pressured them they’d give up the ball and it worked for us,” said coach Jay Witham said. “We varied from three-quarter court and man-to-man.

“We did a good job of changing defenses to help our offense.”

The Cavaliers continued to build on their lead in the third. Carman-Ainsworth held a 25-16 scoring edge in the third to go up 59-26 heading to the fourth.