Boys hold on to Valley lead 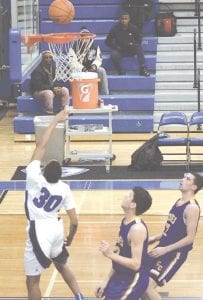 Carman-Ainsworth’s Jamarreyon Houston goes up for a lay-up against Bay City Central on Jan. 16.

FLINT – The Carman-Ainsworth boys’ basketball team was back on the winning track Tuesday night, blowing out Lapeer 77-45.

The Cavaliers jumped out to a 17-10 lead after the first that eventually ballooned into a 39-20 advantage by halftime. Carman-Ainsworth then outscored the Lightning 38-25 in the second half to cement the victory.

As a team, the Cavs shot 63% from the field and won the rebounding battle 23-14. Carman-Ainsworth also recorded 14 assists on 35 made baskets, while turning the ball over only six times. 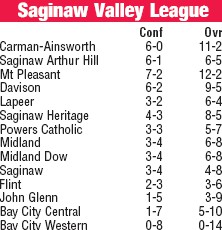 The Cavaliers’ nine-game winning streak came to an end at the Red Hawk Showcase in Grand Rapids on Saturday, as Carman-Ainsworth lost to Holland West Ottawa 45-27.

The Cavs were slow out of the gate and were outscored 13-2 in the opening quarter and trailed 30-11 by halftime. Carman-Ainsworth outscored the Panthers 16-15 in the second half, but was unable to mount a comeback. The Cavs shot a miserable 37% from the field and committed 13 turnovers.

Last Friday, the Cavs continued their winning ways by beating Bay City Western 60-42. Carman-Ainsworth came out hot in the first half, outscoring the Warriors 18-9 and 15-8 in the first and second quarters, respectively.