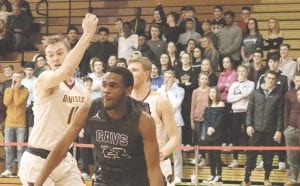 Carman-Ainsworth O’Mari Duncan drives to the hole past two Davison defenders on Feb. 16.

FLINT – Carman-Ainsworth hosts the district playoffs in the Class A state tournament starting on Monday. The Cavaliers (17-2) host Fenton (8-10) at 5 p.m. Monday night. The victor will take on the winner of the Flushing (14-5) vs. Flint Jaguars (4-14) matchup, which takes place at Flushing on Monday at 6 p.m.

The Cavaliers will be favored to win the district, as they are currently ranked ninth in the state and fifth overall in Class A, according to the Detroit Free Press. 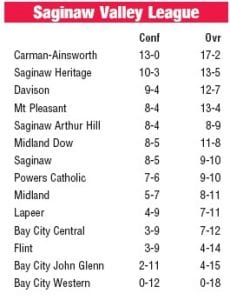 Grand Blanc will still be a tough-out, as the Bobcats boast a seventh-overall ranking in Class A, according to MaxPreps. No other teams in the district are ranked within the state.

Last Wednesday, Carman-Ainsworth defeated Powers Catholic 57-48. The Cavs opened the game on an 18-6 run but only outscored the Chargers 42-39 for the remainder of the game.

Duncan led all scorers with 24 points along with his four rebounds, one assist, one steal and one block. Lewis finished with 12 points, five assists and a rebound. Fletcher added eight points, five rebounds, three blocks and an assist. Ballard chipped in with eight points, two rebounds and a block.

Carman-Ainsworth, 17-2 overall and 13-0 in conference play, hosts Port Huron tonight at 5:30 p.m. in its last game of the regular season.