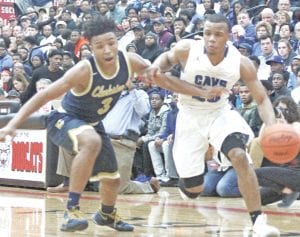 GRAND BLANC — The Carman- Ainsworth boys’ basketball season came to an end on Tuesday night, falling to Clarkston 52-31 in the Class A state quarterfinals at Grand Blanc High School.

Carman-Ainsworth scored on a floater in the paint from senior Jamarreyon Houston on the first possession of the ballgame but was stagnant offensively for the rest of the opening quarter, as the Wolves closed out on a 16-5 run.

Both teams went scoreless for the nearly opening three minutes of the second quarter. At the 5:15 mark, Donnal Conway pump-faked his defender in the corner, drove baseline and finished with a twisting reverse lay-up, cutting Clarkston’s lead to 16-9.

The Wolves answered with a pullup jumper on the other end from point guard Foster Loyer, who was awarded Michigan’s coveted Mr. Basketball as the top player in the state on Monday. On the ensuing possession, an errant pass sailed off Conway’s fingertips and out of bounds, resulting in a turnover and Clarkston’s ball. Carman-Ainsworth immediately came out in a full-court press.

Loyer was able to break the pressure off the dribble and took the ball the length of the floor before missing a lay-up. A Clarkston teammate corralled the rebound and laid it in the hoop, extending the Wolves lead to 20-9 and forcing Carman-Ainsworth to call a timeout at 4:22.

Clarkston added two more buckets before the Cavs were able to get anything going again offensively. O’Mari Duncan spun out of a double team in the low post and was fouled as he went up for a lay-up but missed both free-throws. On the next possession, Duncan found Ja’kavien Lewis in transition for a pull-up three-pointer, cutting the lead to 24-14 with just under two minutes left in the half. Loyer then found teammate CJ Robinson for a three-pointer with a minute remaining. Duncan missed two more free-throws on the next possession, sending the Cavaliers into halftime trailing 27-12.

Carman-Ainsworth came out of halftime with its defense firing on all cylinders, causing constant pressure and keeping the Wolves scoreless for the opening two minutes. At the 6:32 mark, the Cavs trapped Loyer at half court, as Michael Fletcher stole the ball and took it the other way for a dunk. The Cavs defense forced another fast break on the next possession, as Duncan made a lay-up in transition to cut the lead to 27-16 at with 5:58 left in the third quarter. The Wolves added a bucket and a free-throw to extend the lead.

At 4:30, Lewis missed a three-pointer, but Fletcher caught the rebound in traffic and laid the ball in. After a defensive stop, Duncan made another lay-up, making it a 30-20 ballgame and forcing Clarkston to take a timeout. The Wolves outscored Carman-Ainsworth 6-2 for the rest of the quarter, taking a 36-22 lead into the final frame.

The game was never closer, as Clarkston closed the game on an 18-9 run, securing the 52-31 victory.

The Wolves shot 63% from the field, as Carman-Ainsworth only managed to shoot 41%. Clarkston also won the rebounding battle 22-16. Both teams committed 10 turnovers.

Dustin Fletcher led the Cavs with eight points, three rebounds and an assist. Lewis added eight points, two steals and a block. Jamarreyon Houston contributed five points and a rebound. Duncan finished with four points, two rebounds, an assist, a steal and a block. Conway had four points and two rebounds. Michael Fletcher had a team-high six rebounds, along with his two points, one block and one steal.

Last Wednesday, Carman- Ainsworth won the regional championship over Traverse City West 61-38. The Cavs jumped to a 12-9 lead after the first but led 24-22 at halftime. Carman-Ainsworth dominated the second half, scoring 37 points while holding the Titans to a mere 16 points.

Carman-Ainsworth finishes the season with a 23-3 overall record.